The Society of Explorers and Adventurers

Kungaloosh explorers! Did you know there was a story which links together over 20 Disney attractions from their theme parks throughout the world? This is the Society of Explorers and Adventurers and together we are going to cover some of the basics. You can find a lot more information on it around this site, including all the members and attractions.

We are going to cover this in 2 main sections, first the story of S.E.A. and then behind the scences which is even more exciting!

Last updated - 12th May 2020 We try and keep this article upto date with the latest S.E.A. developments.

The Story Behind S.E.A.

The original founding members of S.E.A. opened Fortress Explorations, a walk-through attraction based in Tokyo DisneySea, to help ‘promote the sharing of nautical and scientific knowledge for world exploration’.

We don’t hear anything about S.E.A. for the next 300 years we first hear about Camellia Falco in 1850 taking over the directorship of the Museam of Fantastic Flight (Tokyo DisneySea) from here father Cellino. We can see a portrait of her being inducted to S.E.A. which is on display at the museam of Fantastic Flight as they celebrate 100th anniversary of the birth of Camellia Falco.

Next we are introduced Lord Henry Mystic, a collector of antiquities and treasures from around the world, opens his house, Mystic Manor (Hong Kong Disneyland), for tours of his collection of antiquities. Aligning the walls are pictures and portraits documenting all his adventurers - this includes a very special 1899 group portrait of the society.

This portrait not only introduces Lord Henry Mystic as a member but also 7 additional members:

Due to the portrait in Mystic Manor we also found out another member of S.E.A. Harrison Hightower III who owns Hightower Hotel (Tokyo DisneySea). Harrison Hightower III inherited his fortune and used it to get what he wanted. He had a particular interest in artefacts from other cultures. If he couldn’t buy it he stole it. It is one particular exploration of the fearful Mtundu he stole their scared idol Shiriki Utundu, dismissing concerns that it was cursed.

On December 31st, 1899 Harrison threw a New Years party to show off his latest acquisition. When the clock stroked 12 Harrison was in the elevator with the idol on the way to his penthouse apartment. The idol came to life and Harrison was blasted into oblivion.

In 1911 the New York Preservation Society opened up the Hightower Hotel for tours.

This secret socity doesn’t just exist in one place there are many chapters spread across the world and occasionally they all meet up. This brings us to our next member, Dr Albert Falls famed discoverer of Schwietzer falls and owner of the infamous Jungle Cruise Navigation Company. He created the company to help his fellow explorers navigate remote areas.

The next chapter in our timeline is the Adventurers Club (Pleasure Island, Walt Disney World). Owned by Merriweather Pleasure contained an extensive collection of artefacts he collected from around the world. This includes the same masks from Lord’s Henry Mystics collection (stolen or given? We don’t know).

This is a complicated back story we’ve only covered the major attractions which link the S.E.A. story line together. What’s even more exciting is the behind the scences story!

S.E.A. started off as a happy accident which was taken by the imagineers and offically extended. So lets start right at the begining with the oldest attraction, The Adverturers Club which has nothing to do with S.E.A. Opening in 1989 the Adventurers Club was a themed nightclub in Walt Disney World’s Pleasure Island. It was designed around a private members club for explorers, the club closed in 2008 and some of it’s props were transferred to another attraction which was being built at the time, Mystic Manor.

Even though we credit The Adventurers Club at the beginning, the first attraction which mentions S.E.A. is Fortress Explorations from Tokyo’s DisneySea.

So how did we get the name ‘Society of Explorers and Adventurers’? I can only make a guess - it could be a play on words based on the park Fortress Explorations is apart of, DisneySea. DisneySea got its name for two reasons, first it’s designed around ports at sea and secondly, it’s near the sea.

Tower of Terror, Mystic Manor and the Explorers Club Restaurant

In comes Imagineer Joe Lanzisero, the Creative Lead for the Tokyo Disney Resort Portfolio. Shortly after the park opened Lanzisero began work on bringing Twilight Zone Tower of Terror to a new expansion, the American Waterfront port. Unfortunately, the Twilight Zone (the storyline to the other versions of this ride) wasn’t popular in Japan so a new backstory was needed. 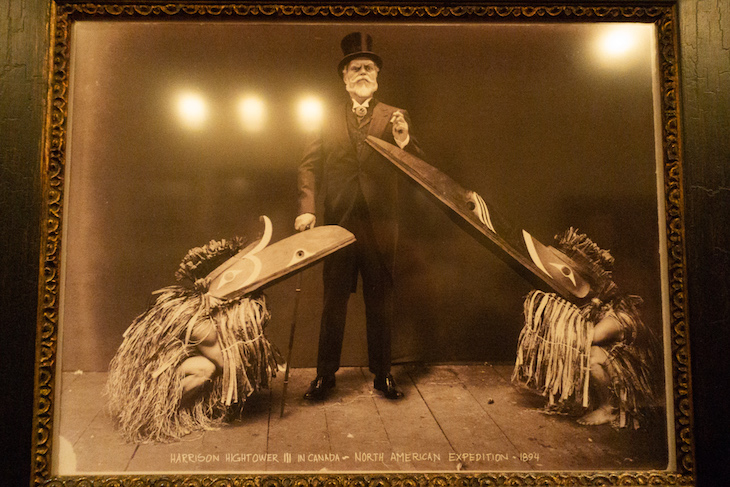 The show writer Michael Sprout came up with Harrison Hightower III (modelled on the Imagineer Joe Rhode). He was a ruthless explorer who had an ill-fated end when travelling in an elevator with a scared idol he stole.

Unfortunately, Tower of Terror and Harrison Hightower III had no connection to S.E.A. inside the attraction. At this time S.E.A. was based solely at Fortress Explorations and had very little to do with the American Waterfront expansion where Tower of Terror was to be located.

This all changed with Lanzisero’s next project, The Mystic Point expansion at Hong Kong Disneyland. What was missing from Hong Kong Disneyland was a Haunted Mansion - one existed in all the other Disney parks. However, just as with the Japanese Tower of Terror, the Hong Kong market didn’t really understand the concept of haunted houses. Ghosts tend to be friendly and don’t jump out to scare you.

A new ride with a unique and original backstory was created, Mystic Manor.

Cannot take credit for SEA..only Adventurers Club. I thought SEA was originally guest generated...which is even cooler. Is it not? https://t.co/16EdMJl4oc

The link was later confirmed by Joe Rhode with the creation of Disney’s Alunai Resort in Hawaii.

The 2016 Destination D event ‘Amazing Adventures’ it was announced that Imagineering was expanding the S.E.A. backstory. This announcement came shortly after the opening of the Skipper Canteen in Walt Disney World’s Magic Kingdom. This restaurant provided a complete backstory to the Jungle Cruise and shows that Dr Albert Falls, the owner of Jungle Navigation Co, was a member of S.E.A and held secret meetings within the canteen.

The Jungle Cruise had already been connected to The Adventures Club and now by extension to S.E.A. The trunks next to the old Fastpass machines included labels from Emil Bleehall and Pamela Perkins from The Adventurers Club.

In 2017 the Bengal BBQ (Disneyland) was reopened with confirmed more Jungle Cruise and S.E.A. connections.

Barnabas T. Bullion and Jason Chandler are both members of S.E.A. and got their links confirmed in a letter in Walt Disney World’s Big Thunder Mountain queue line. The letter is from Jason Chandler asks him not to dig further into the mine.

Great Caesar’s Ghost, old chap, I haven’t heard from you since our little misadventure in El Dorado! I am indeed sorry to hear of the second disturbance within Big Thunder Mountain, but I did warn you that you were prospecting at your own peril when I sold you the drilling machine. I took the liberty of consulting Madame Zarkov at the Museum of the Weird, and it is her considered opinion that you should abandon the entire operation at once and find a less volatile site. I wish I had better news for you, old boy, but some forces simply are not to be trifled with.

On behalf of your compatriots of SEA, I do hope to see you around the club a bit more often!

Yours in Exploration and Adventure,

Founding Member The Society of Explorers and Adventurers

Big Thunder is set in the late 1800’s at roughly the same time period as Lord Henry’s Mystic portrait, but this doesn’t feature Jason Chandler. The letter also mentions that Jason Chandler is a ‘founding member of S.E.A.’ which doesn’t follow the storyline laid out by Fortress Explorations, or Soarin: Fantastic Flight!

The first S.E.A. based attraction to debut in the US and the first to debut after the 2016 Destination D event. Miss Adventure Falls is a water slide attraction based in Walt Disney World’s Typhoon Lagoon. It includes a backstory of Mary Oceaneer (shown in the portrait in Mystic Manor) and her parrot who was diving for treasure when a typhoon hit and shipwrecked them on an island.

The sea-iverse is huge and it’s growing with different stories from different parks around the world. What started out as a small secret society has turned into a massive story arc between attractions and parks. We are looking forward to the Jungle Cruise films - there are rumors we could see some S.E.A. hints.