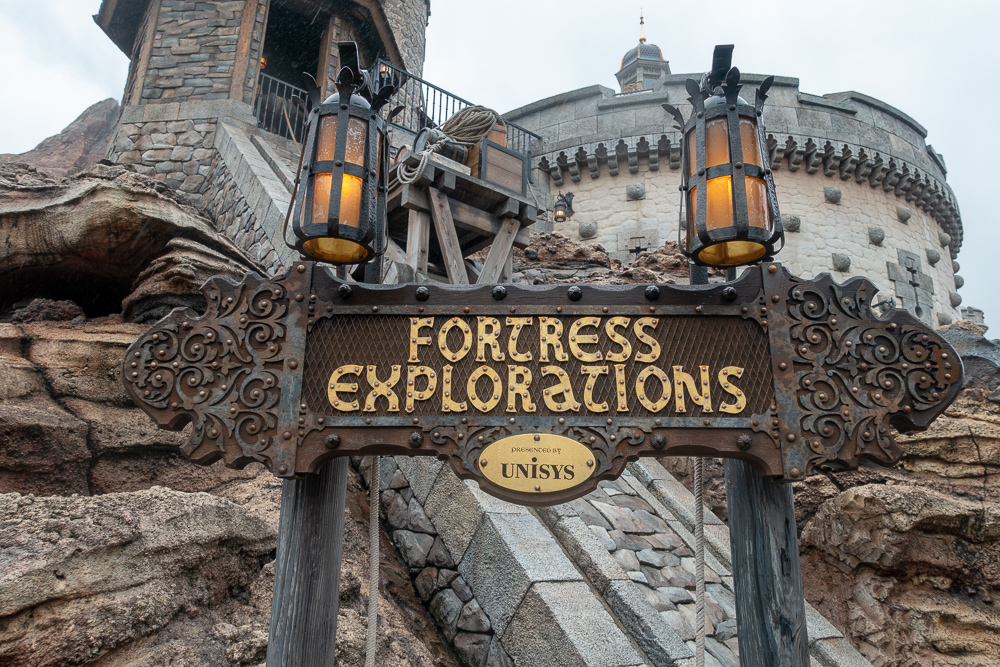 This elaborate 15th-century fortress is dedicated to the golden age of exploration. This interactive attraction features optical illusions, model galleons on a liquid map and a model of DaVinci’s flying machine - it is the best, most richly detailed walkthrough attraction in the world.

Opening in 2001 with the rest of DisneySea, the attraction comprises of the citadel, which is split up into 11 rooms, a full-size galleon (ship) moored outside on the landing and 3 restaurants, Magellanes, Magallanes Lounge and the quick service Refrescos.

Information about the design and history of Fortress Explorations is hard to come by, even the Wikipedia article only has 3 small paragraphs - but we have managed to find out a bit more.

Twitter user @cabel also discovered a collection of Wes Cooks work which he purchased via a job lot at auction. They are a set of rough but extremely detailed sketches made by Cook for the construction of the Galleon.

Fortress Explorations is the original S.E.A. attraction, it lays the foundations of what S.E.A. is which future Imagineers pick up on and expand. It introduces us to the 4 core concepts of S.E.A. Adventure, Romance, Discovery and Innovation. When entering Fortress Explorations you can find a leaflet detailing this in a lot more detail.

Fortress Explorations also gives us the founding date of S.E.A. August 12th, 1538. As well as the moto “Exploration Continua” which you can see on this plaque from the landing just outside the galleon.

On the reverse side of the leaflet explaining S.E.A. there is a map of Fortress Explorations.

You can freely walk through the citadel, waterfront and galleon, but for the more adventurous, there is also the Leonardo Challenge (Japanese only). The challenge involves using a provided map to discover clues which take you to different parts of the citadel. You can find a copy of the map below, kindly translated into English for us by twitter user NYCPSurinvited.

To the bottom right of the map you can see a white circle this provides the interactivity to the challenge and is for use in a special machine at certain parts of the challenge. You can see it in action below:

In total 10 rooms form part of the citadel and a Volcano Observation Turret.

This room provides us with information on what we later discover are honory members of S.E.A.

Explorers hall was designed by the very talented Richard Gutierrez and were one of the few designers I could track down from the attraction. You can see below the concept mockups for the room.

The Navigation Centre is its own separate beautiful attraction. A huge circular map of the ocean filled with water with a collection of tall ships floating. You can pay (I believe around 100yen) to sail the ships. There are a number of islands, a monster which appears ever so often and a cloud where the rain falls.

Take a look at the short video below to get a sense of this attraction.

Dotted around the top of Fortress Explorations facing the harbour are a series of interactive cannons which make sound effects and produce smoke when fired.