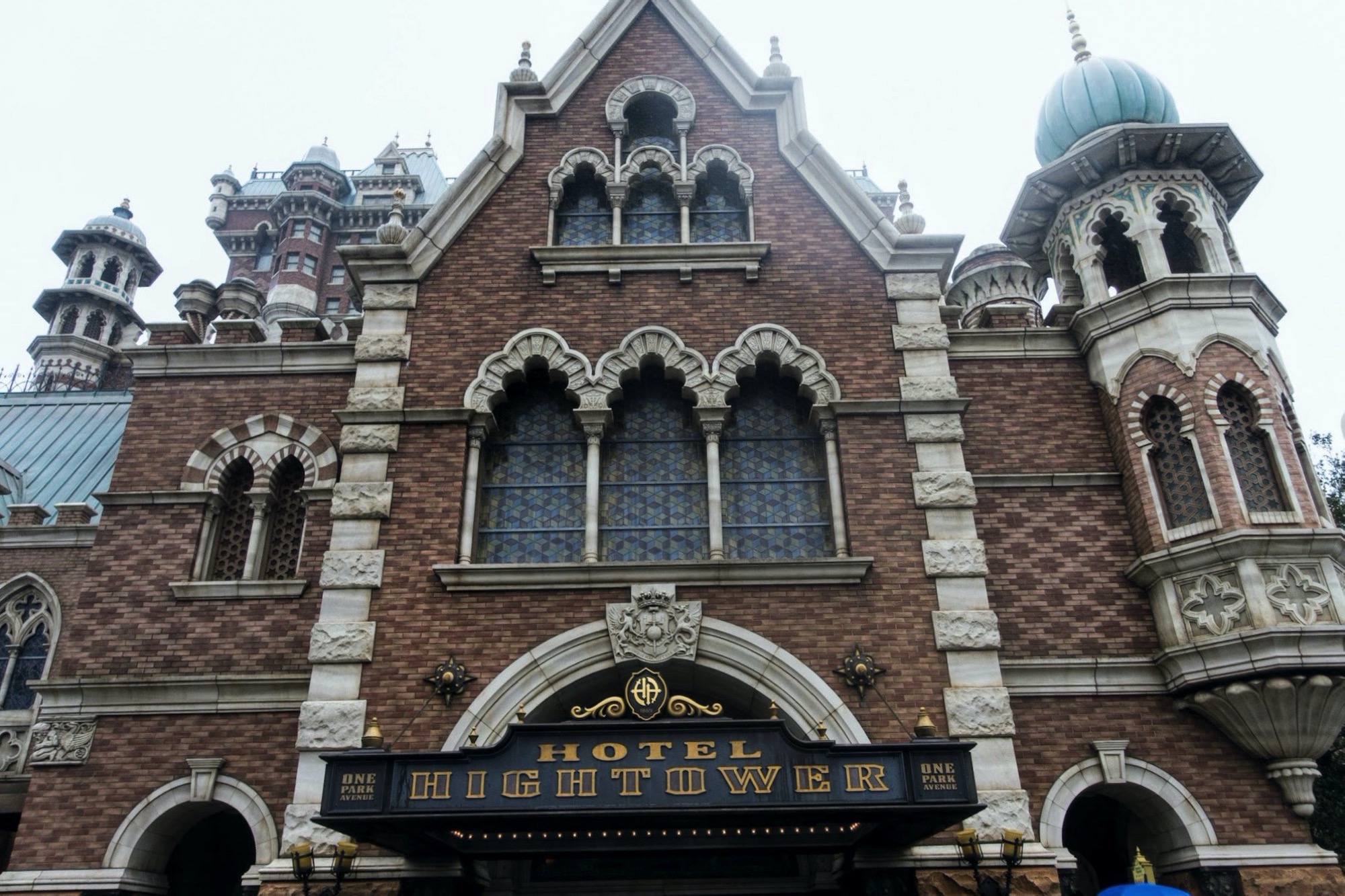 The Tower of Terror (ToT) is a simulated free-fall drop ride. It can be found in Walt Disney World, Disneyland Paris, Disneyland and Tokyo Disney Sea. The version in Tokyo Disney Sea is the only version with links to S.E.A. via Harrison Hightower III.

Built-in 2006, Tokyo’s Tower of Terror was part of Tokyo Disney Sea’s American Waterfront expansion, it is a direct port of the second generation of ToT attractions (WDW’s version being the first generation, Disneyland the second).

There were two problems with a direct lift of the ride from the U.S. markets. Firstly The Twilight Zone isn’t well known within Japan and secondly, the Oriental Land Company (who own the park) would have to pay continuing licensing fees for a program that their main audience has probably never seen - so they created a new storyline.

Anyone who visits American Waterfront will soon find their gaze irresistibly drawn to the unique form of the lofty Hotel Hightower. The building’s unusual design and extraordinary proportions were symbols of the wealth and power of its notorious creator, antiquities collector Harrison Hightower III, and indeed the stories of the man and the hotel are inextricably linked.

After inheriting his father’s mansion, Harrison Hightower III decided to renovate his home, adding gardens, a pool and spa, the five-story “Caliph’s Tower”, the eight-story “Indian Tower” with its many guest rooms and a ballroom, and finally the 14-story “Great Tower” in which Hightower kept his personal apartments in the penthouse suite. Although the overall style of the hotel is Gothic, to a certain extent there are elements of other architectural styles from all over the world. Also, as a further testament to his greatness, Hightower installed many artifacts he had acquired during his globe-spanning expeditions in various places around the hotel.

Harrison Hightower III was a collector of cultural antiquities. Accompanied by his valet, Mr. Smelding, he traveled to every continent to collect his curiosities, including Asia, Europe, South America and Oceania. Once he found an artifact he wanted, he would use any method available to acquire it, including on occasion outright plunder.

In 1899, Hightower embarked on the most hazardous expedition of his life, heading up the Congo River and into the dangerous parts of uncharted Africa. Though his intention was to collect the art and craftwork of the region, Hightower soon found himself the object of attacks by hostile local tribes, and many members of his team lost their lives.

Then one day, Hightower’s severely reduced party was chased into the area of the dreaded Mtundu tribe. Though greatly feared by neighboring tribes, the Mtundu welcomed Harrison Hightower’s ill-fated expedition quite cordially, and actually invited the adventurers to eat with them.

During the meal, Hightower learned of the existence of the tribe’s protective idol. The statue was called “Shiriki Utundu” and Harrison Hightower wanted it for his own. He tried to persuade the village headman to sell him the idol, but was refused, which only served to increase his desire. He then told his men to prepare for battle, and grabbing Shiriki Utundu from its altar, stole the idol and escaped the village.

The expedition was nervous and afraid that the many warriors of the Mtundu tribe would pursue and attack them, but strangely they only stood by and watched expressionlessly as Hightower took their idol. Some thought they may even have been slightly smiling…

On December 31, 1899, Harrison Hightower III was back in New York and held a press conference in his private office at Hotel Hightower to unveil his latest “find”. Manfred Strang, a reporter from the New York Globe-Telegraph, asked if Shiriki Utundu wasn’t really cursed, but was then thrown out of the building. After that, Hightower was his usual bombastic self, giving a heroic description of his adventure and allowing no real questions. That evening, he gave a spectacular New Year’s Eve party to celebrate his return from Africa.

Though the party was a success, Hightower left early to find a place for Shiriki Utundu in his penthouse apartment. As Hightower boarded the elevator, Mr. Smelding warned him to give proper respect to the idol. Hightower refused to pay heed, and, sneering in defiance, even put out his cigar on Shiriki Utundu’s head!

As the clock struck midnight, all lights in the hotel went out and the party was plunged into darkness. People outside witnessed a dazzling green light bursting out from Harrison Hightower’s rooms at the top of the hotel. From the top floors to the bottom, the benighted hotel was pierced by hundreds of thousands of volts of electricity. The arched windows in front shattered with a loud crash, causing broken glass and other debris to rain down on the onlookers below. Small fires had broken out, and panicked party guests scrambled to escape, with many injured in the rush.

However, the most astonishing thing of all was that Harrison Hightower III, who should have been in his rooms at the top of the hotel, abruptly disappeared without a trace.

With the explosion on the top floors, the cables of the hotel elevator were also cut, and Harrison Hightower III was heard screaming in fright. The only thing that was found in the remains of the shattered elevator, though, was Shiriki Utundu. Harrison Hightower was gone. Had Hightower somehow escaped from the elevator unharmed, or was he not even riding it when it crashed? Could he have been transported away somewhere? No one knows the truth.

After Mr. Hightower’s mysterious disappearance the hotel was closed down. People in New York began calling it the “Tower of Terror”. For 13 years, no one dared to enter the hotel until the New York City Preservation Society, led by its president and founder, Miss Beatrice Rose Endicott, began a plan to offer tours of the building to the public. The Society hopes that through its efforts people will again appreciate the architectural beauty of the hotel and the cultural value of the treasures in Harrison Hightower’s collection.

Still, dark rumors persist amongst the people of New York. Some say how they saw the “strange, green lights” on that fateful night, while others recall hearing “a terrible scream”. The passage of time seems only to have increased the mystery surrounding Hotel Hightower.

You can hear Michael Sprout, ToT show writer, talk about transforming the attraction for a different market in the Tower of Terror panel at Midsummer Scream, 2017.

When Tower of Terror originally opened it had no links to S.E.A. which, at that time solely existed in Fortress Explorations across the harbour. It was linked to S.E.A. by Joe Lanisero who was the Imagineer for ToT in Tokyo and Mystic Manor in Hong Kong. He decided to add Harrison Hightower into the 1899 group portrait, which hangs in the hallway of Mystic Manor.

When Tower of Terror opened they gave out a newspaper with additional information about the story. This has been translated from Japanese, so see the original take a look at the gallery below.

Time is New York in 1912. Since the mystery of the owner’s disappearance in 1899, the Hotel High Tower has come to be called the Tower of Terror hotel, and after 13 years, has been repaired by the New York City Conservation Association Finally, the inside of the hotel will be released. The truth of the mystery is …

Finally the whole picture of Hotel High Tower is clear!

The American waterfront, Hotel High Tower, opened on January 23, 1892, built by the wealthy man Harrison High Tower III to exhibit his collection with an adventure boat. It was called the Tower of Terror hotel and had been closed for 13 years since Harrison Hightower III achieved the mystery disappearance on the night of December 31, 1899. However, because of its high value as a building, it has been restored and made public by the New York City Conservation Association.

We are an organization working for the preserva.tion of historical buildings in New York City. This time we have opened a tour of Hotel High Tower, which is part of that activity, and to many of you By looking at it, we hope that this historic hotel will continue to be protected for future generations.

Hightower’s Adventures and Rumors Around Him

Harrison Hightower III, owner of the Hotel Hightower and a collector of art and crafts. The adventure boat was numerous, and on unexplored travel around the world, he brought back valuable goods from the area. There are rumors that some of them have been looted, but it is also true that the value of the items he has collected is extremely high. The Hotel High Tower, which will be unveiled this time, exhibits many pictures and photographs depicting the adventure.

In 1899, a strange idol “Siriki Utundu” with the meaning of “Believe in disaster” which Harrison Hightower III acquired in unexplored regions of Africa. Harrison Hightower III took this idol and took the elevator to head to his room on the top floor. And then he lost the mystery. Whether or not this idol is related behind the case has not yet been elucidated.

On 31st December 1899, a big party was held at the Hotel Hightower, showing the strange idol “Siriki Utundu” brought back from Congo, Africa. New York Globe News Press Manfred Strang, who attended the previous press conference, said what happened at that time. “It was clear that Mr. Hightower had forcibly obtained the idol from the natives of Africa. And, as if it was a shame on my question of being an idol of a curse?” After the party, “ Mr. Hightower who went to his room on the top floor with the elevator elevator with “Siriki Utundu”, then the elevator of the hotel falls! Since then, no one has seen him. Only the “Siriki Utundu” was left in the dropped elevator. Where did he go?