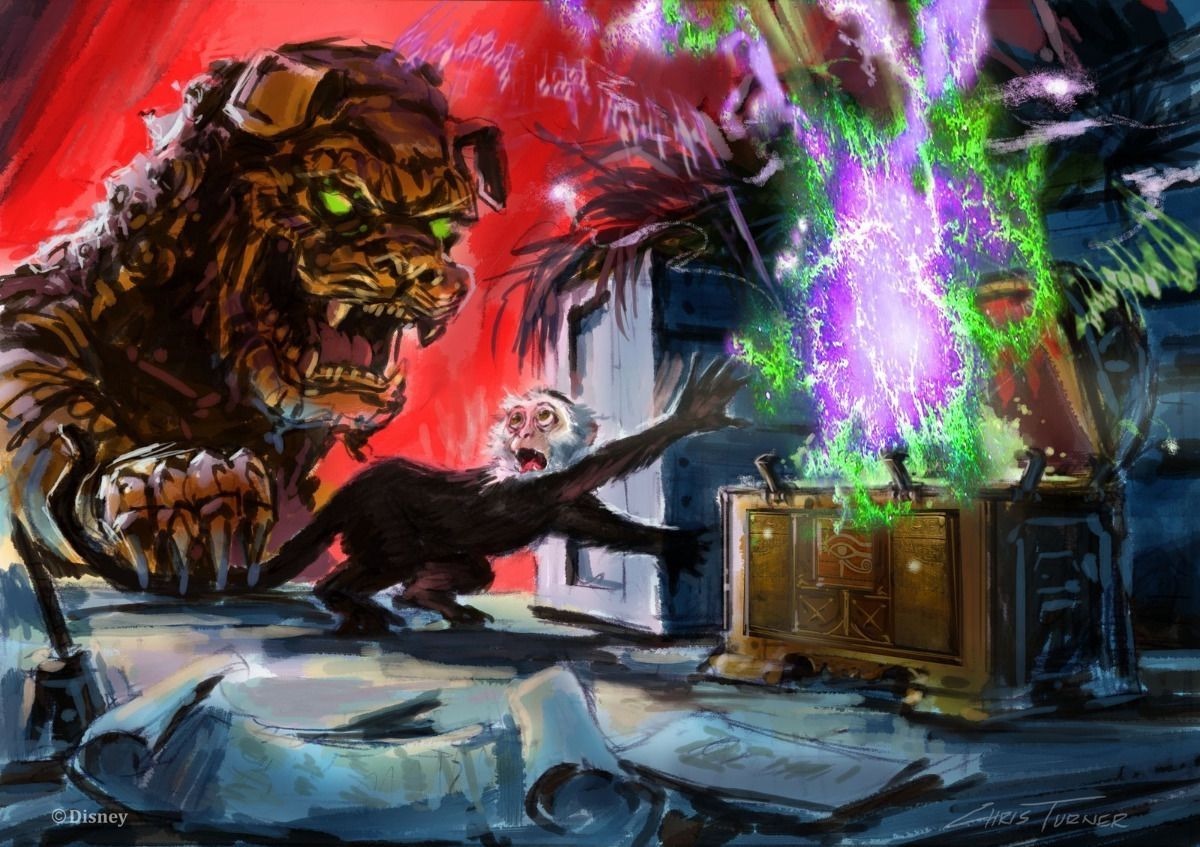 Mystic Manor & the origins of S.E.A.

As we continue our tour through the S.E.A-iverse (my new favourite made-up word 😬) we come to one of the most important attractions, Hong Kong Disneyland’s (HKDL) Mystic Manor.

This is going to be a long post (this ride is the bedrock of the modern S.E.A.) and it’s taken a while for me to write it. So bare with me, pull up a chair and maybe grab a cup of tea - Lord Mystic would approve.

Lets first start at why this attraction exists, in early 2009 the executives of Hong Kong Disneyland, owned by the government backed Hong Kong International Theme Parks Company, were looking to expand their tiny park - it was really small and it still kind-of is. They brought in experienced Imagineers Joe Lanisero and Robert Coltrin with the brief to build a single large land that would feature a single E-ticket attraction. However, the then chief financial officer, Jim Hunt, quickly pointed out that why build only one large land when they could several smaller ones for the same cost. The Imagineers came up with an original 10/12 concepts but decided to whittle it down to 3 mini lands.

Around the same time Disneyland Paris had just launched their very successful Toy Story Playland. With it being much cheaper to copy a land than to develop a new one it was decided one of the lands should be Toy Story Playland. This left two lands left to be developed with a slightly higher budget, Mystic Point and Grizzly Gulch. While Grizzly Gulch is an awesome land it has nothing to do with S.E.A, so we are going to stick with the second land Mystic Point.

Hong Kong Disneyland was missing an attraction variant that, at that time, existed in every Disney Park - The Haunted Mansion.

“There weren’t that many dark rides in the park, so we felt that a Haunted Mansion-type experience was the right thing” - Robert Coltin, talking about Mystic Manor in ‘The Haunted Mansion - Imagineering a Disney Classic’ - Amazon UK

The Haunted Mansion was pencilled in for the expansion. However, a direct lift wouldn’t have suited the Chinese market. The Chinese audience doesn’t view ghosts, or spirits in the same way as the western culture. They believe the spirits of the dead should be honoured and respected, which made the Haunted Mansion in its current form a difficult sell.

Joe and Rob needed to start back at the beginning. The original Haunted Mansion in Disneyland was designed as a magic show, a showcase of all the illusions the Imagineering team could conjure up in the 50’s & 60’s. This was the initial starting point of Mystic Manor.

Joe Lanisero brought in fellow imagineer and show writer Micheal Sprout, they had previously worked together converting the Twilight Zone - Tower of Terror into a version suitable for Japanese audience *. So he was just the guy to do the same for the Haunted Mansion.

Normally when designing rides the Imagineering teams start with the back story. Mystic Manor is based on a backstory from another attraction in Tokyo’s DisneySea, Fortress Explorations. We don’t know why the imagineering team decided to use this attraction as the basis of Mystic Manor but in doing so they created the S.E.A. we know and love today.

So What does this newly redeveloped secret society need? Interesting characters! Micheal developed the character of Lord Henry Mystic, an upperclass English gentleman who travels the world collecting treasures and antiquities to other S.E.A. members. As part of the ride story Lord Mystic has opened up his house as a museum so guests can see his latest collection, which includes a mystical music box. 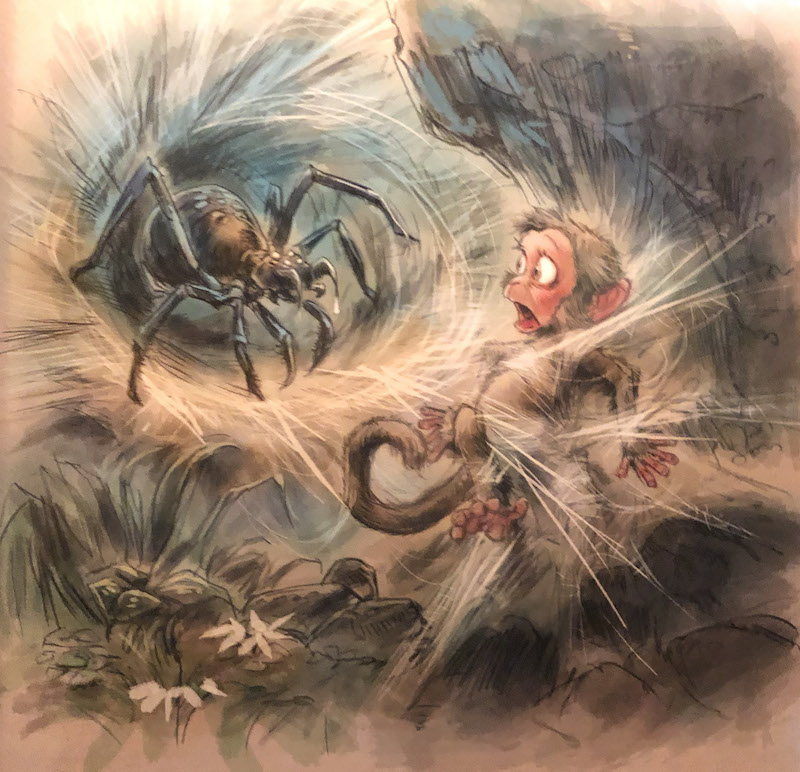 - Image of Alfred stuck in a giant spider web, taken from the Mystic Manor queue line.

All good Disney characters have a sidekick and Lord Mystic was no exception, a monkey (which are considered mischievous in Chinese culture) named after his uncle Albert. Albert is key player in the rides story, he is the open which unleases the power of the music box.

Check out the pre-show below for a summary of the rides story.

While the imagineers where developing the characters they realised they have a lot of story to tell you in quite a short pre-ride show. This is much easier to do with cartoon characters. The team enlisted the help of creative directior Mark Schirmer and concept designer Ethan Reed to transform the photo realistic Lord Henry and Albert into their cartoons variants we recognise now. This has created one of the many oddities of S.E.A, the inclusion of both cartoon and photo-realistic art styles.

“Originally, Lord Henry and Albert were going to be a lot more realistic looking. I have a background in animation, so I think about these things — the expressiveness of an animation character, giving them big eyes, and exaggerated features. The early Imagineers knew this. Marc Davis and Blaine Gibson, when they created all the characters for the Haunted Mansion and Pirates, they’re not real. The proportions are all exaggerated. The eyes are bigger. The limbs are exaggerated. All that’s for an easy read. In our attractions you just have seconds to tell people what they’re suppose to be feeling about this character. The ride is only five minutes long, and we’ve got so much story to tell. These guys have to be recognisable immediately.” - Joe Lanzisero and Mark Schirmer, Disney 2013 D23 event. Thankfully transcribed on Theme Park Insider 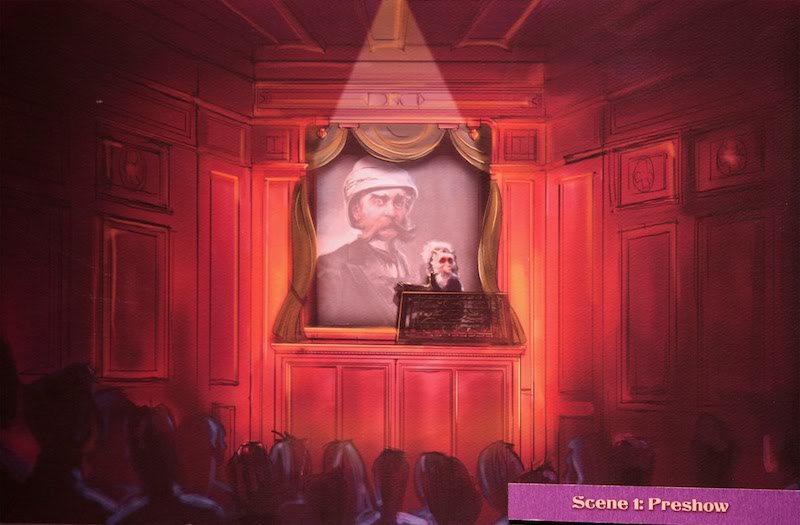 “When we base an attraction on a movie, our guests come pre-wired with some emotional connection to the experience. They’ve seen the movie. They have the music from the movie. They know the characters from the movie. It’s all in their head. So our job becomes planning those trigger moments. On a Winnie-the-Pooh ride, you’re going to want to see Tigger bouncing around and hear the Tigger song. We just have to show that, and boom, that triggers in people’s heads this emotional connection. We were starting here with a blank sheet of paper, so it became important for us to start establishing who these characters were and how they got to know each other. So besides that pre-show film, as you walk through the queue line, it’s like a museum in his house. It’s Lord Henry showing photos of his travels and the other members of the Society. But we also set up how Lord Henry first met Albert. He chose to rescue Albert, and it really creates this bond. They love each other. It’s really a father and son-like relationship.”
- Joe Lanzisero and Mark Schirmer, Disney 2013 D23 event. Thankfully transcribed on Theme Park Insider 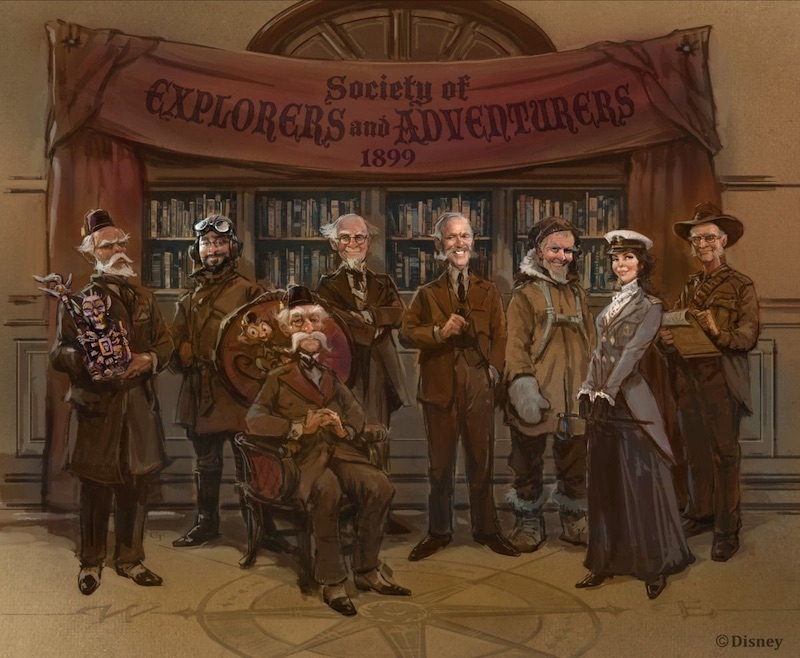 This queue is essentially telling us the story of S.E.A. It includes the now famous group portrait of the society. You can find more information on this poster in the Society of Explorers and Adventurers Part 2 article

I think it’s important to note that I can find no proof that Tower of Terror had any links to S.E.A. before Mystic Manor. This is despite what all original Imagineer interviews led you to believe. Mystic Manor folded Tower of Terror into S.E.A-iverse with this single picture.

There are a few other posters in the Mystic Manor queue line which helped to shed some light onto the unknown characters. 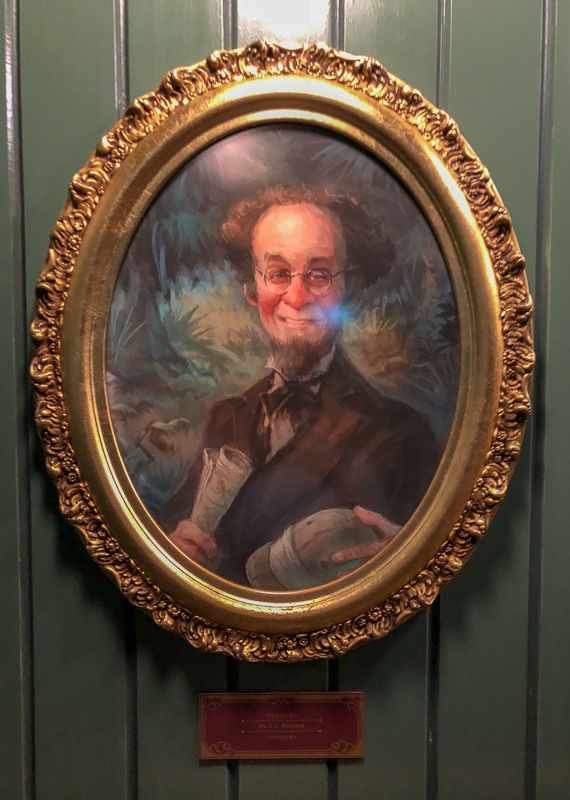 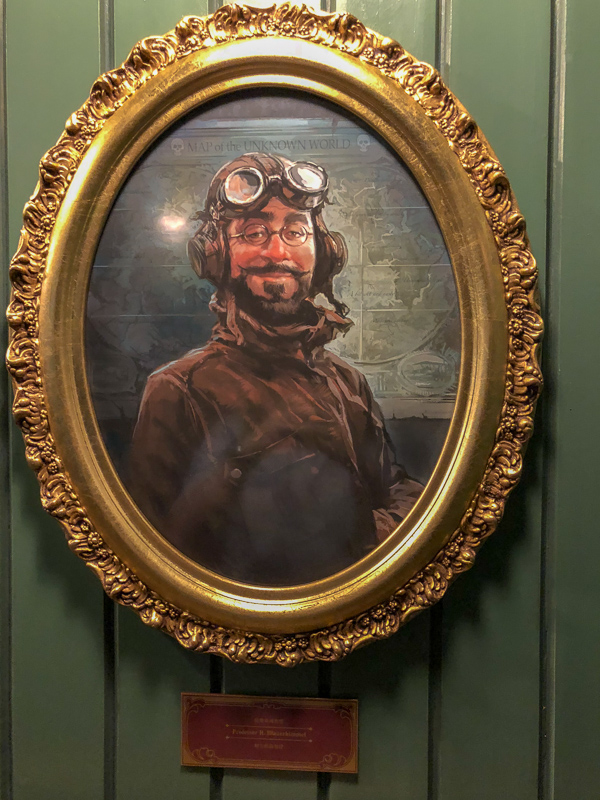 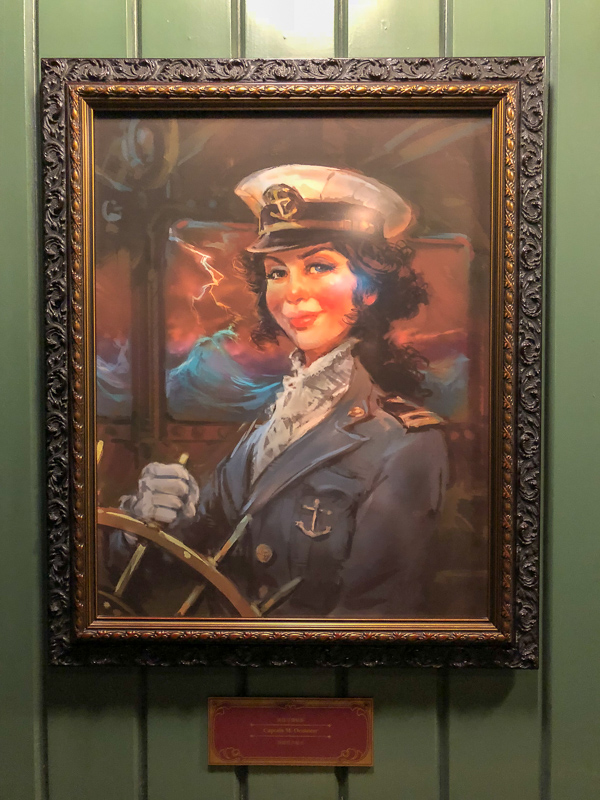 Captain Mary Oceaneer who’s character is being used in another one of Joe’s projects, Oceaneer Labs on the Disney Cruise Line. The other 2 characters don’t currently have an attraction associated with them.

I want to briefly cover the design of the outside of Mystic Manor since I think it highlights one of the few similarities between Tokyo’s Tower of Tower and Mystic Manor, the architecture style of the buildings are considered to the victorian gothic

“We took some of our design cues from ToT, where there are architectural nodes to Hightowers international travels”
- Joe Lanzisero - ‘The Haunted Mansion, Imagineering a Disney Classic’ - Amazon UK

Mystic Manor is actually heavily inspired by Carson Mansion in California (see below). 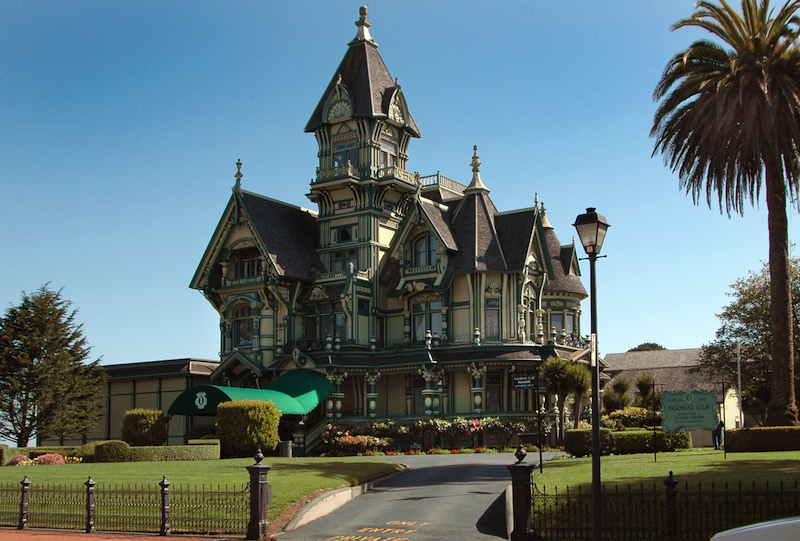 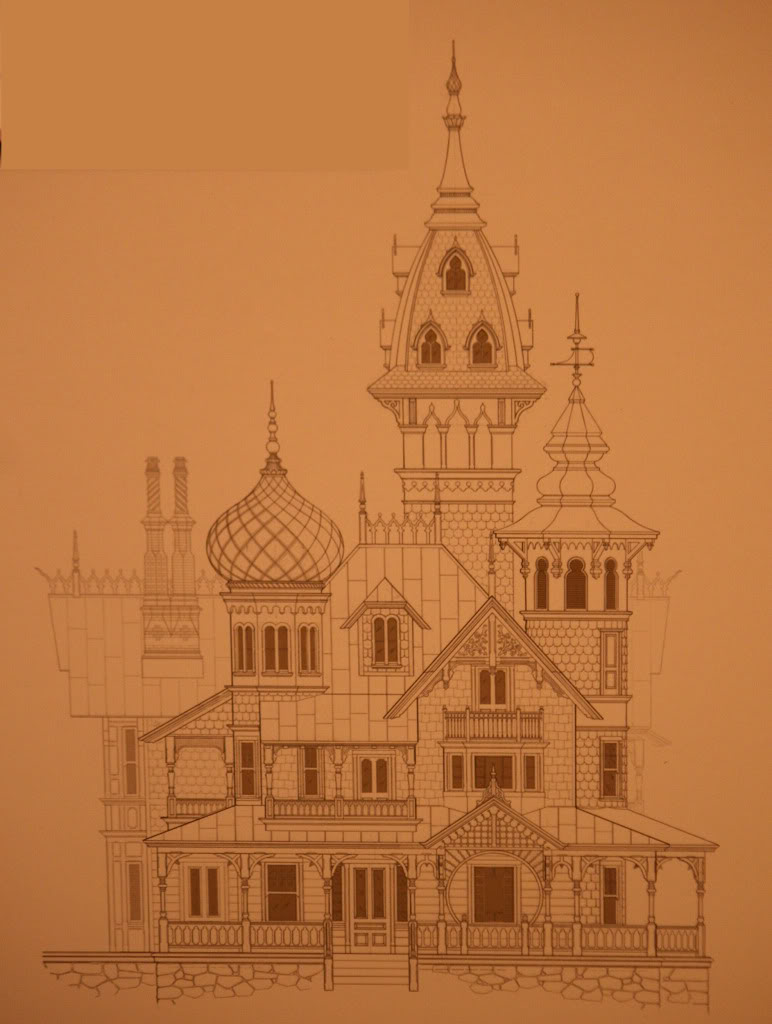 The Rest of Mystic Point

I’ve babbled on for long enough, we will cover the rest of Mystic Point and how it links into more of the S.E.A. story (completely by accident) next time - promise it won’t be as long. So don’t forget to subscribe! In the meantime checkout all the pictures I took when I visited Hong Kong Disneyland in October 2018.