Terror’s of the Jungle

In the dark hours, the Jungle River Cruise is not quite as one remembers. It will be transformed into a voyage of terror from which we hope you return! Those joining the perilous quest will have to count on the Navigator and the Skipper on board the boat to guide them through the Adventureland jungle. The quest for the voodooed emerald stones may have dire consequences. Only the Navigator can guide the explorers to safe shores, or can he? HKDL Press Release

In 2015 Hong Kong Disneyland put on one of the most awesome Halloween programs I have ever seen for any Disney park and it was S.E.A. related 🤤. Last Halloween we covered Jonas Brisbane who was part of HKDL’s 2014 Halloween program, well the following year topped that, check out the promo video below.

Central to the program was Curse of the Emerald Trinity, a Jungle Cruise overlay and it has a S.E.A. backstory. The story revolves around Garrett Reed, a disgraced archaeologist who was booted out of the society by Lord Henry Mystic. He has been seeking out a set of jewels known as the Emerald Trinity. You can read all about the backstory from the newspaper below: 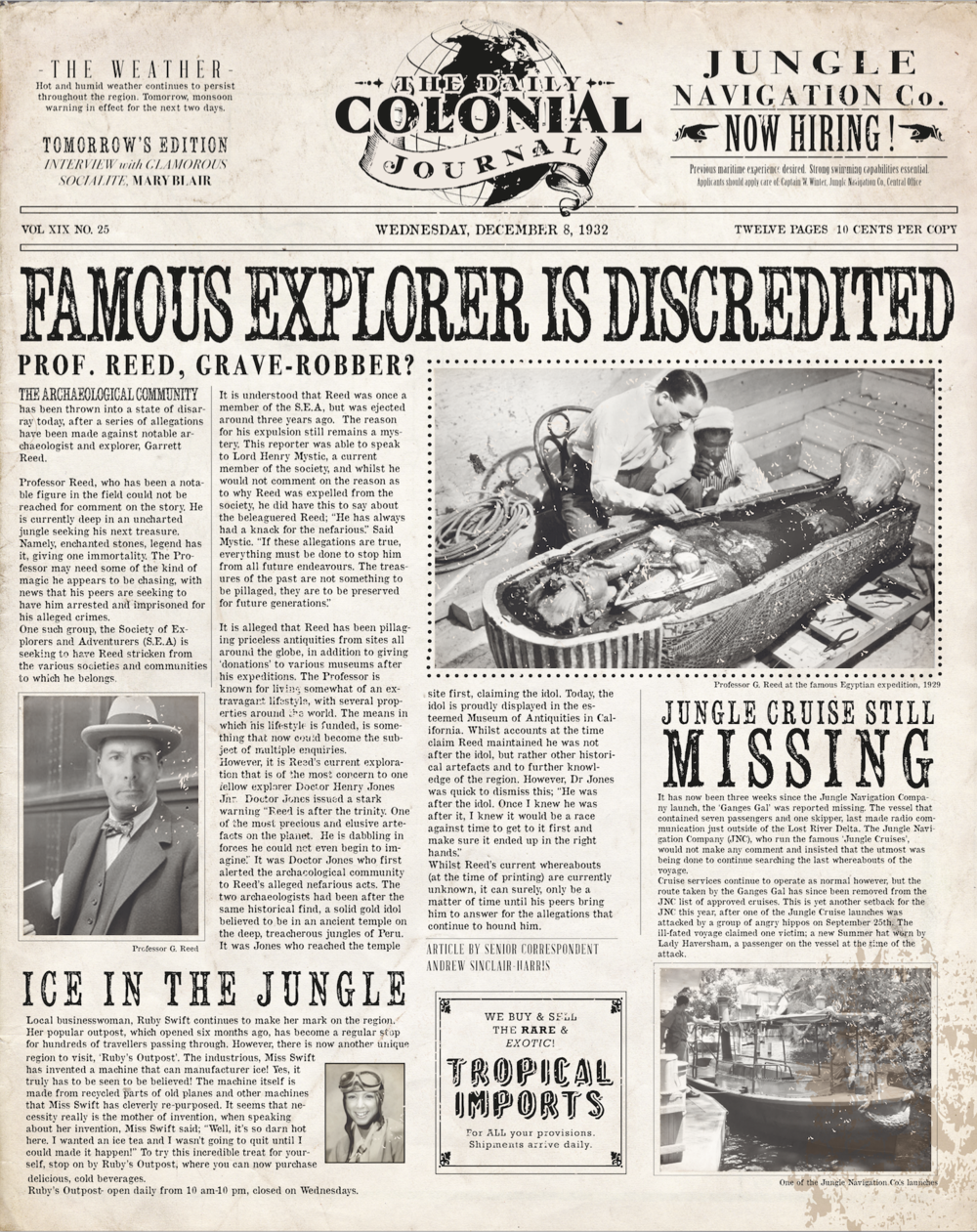 We managed to get hold of Andrew Sinclair-Harris, the Imagineer behind the overlay, for an interview.

The first question and one which I’ve been dying to ask an Imagineer who worked on a S.E.A. attraction, how much did you know about S.E.A. before the project?

Enough, not loads. I think the legend and backstory was always evolving and I think most Imagineers want to bring some of that within their own designs. I knew that it had begun out of TDS and that some of our mythology worked really well with some of the original intent of SEA.

Following up on that is there anyone in WDI who owns the S.E.A. story and you have to run things by, or is it pretty open?

At the time, it was pretty open. There are of course show writers in Glendale and there were a few Imagineers who were almost the ‘gatekeepers’ of SEA however, I think it also comes down to the individual project team being respectful and thoughtful about the use and integration of the society. I think there is a trust there for it to be used in the right way. Of course, every project gets to a certain review level and it would be then that issues could be raised. At HKDL, because we were a smaller team, I think we could get away with a few more things!

It’s a great idea to overlay the Jungle Cruise, did you feel any pressure changing an iconic attraction?

Oh my goodness, tremendously! It’s an iconic and original attraction and you have to go into any design change or revision with the utmost respect to the work done by all the people that have gone before.I don’t think you can escape the enormity of the task of changing a classic. It was also incredibly tough to craft a new story around the existing show scenes.

How was the story-line and characters developed and roughly how long was the process start to finish?

The attraction came about during a blue sky session for Halloween ideas. There had been a lot of success with ‘Ghost Galaxy’ as an attraction overlay a couple of years before and there was a mandate to explore other attractions that could allow a great Halloween overlay. I drew this really quick ballpoint pen sketch on an idea card we had and it gained a lot of traction. I think I was trying to evoke a mood and a feeling at this point, I wasn’t even thinking about a story yet.

After the blue sky session, I was put in charge creative direct the Jungle Cruise Halloween overlay alongside my colleague at entertainment, who would have to facilitate the training of the actors etc.

I wrote the initial draft of the story treatment and came up with a story arc. We then had a show writer from WDI Glendale begin to improve and add to it. At this point, I had the main character and story beats locked. I think the process was roughly six months, maybe a little more from start to finish. 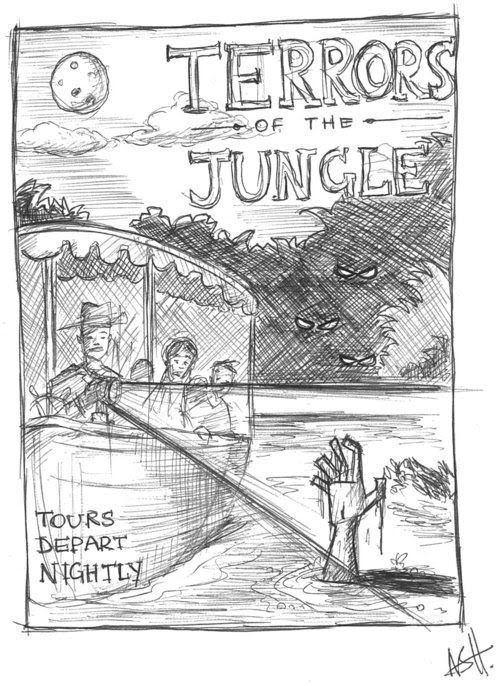 Was it difficult to write an attraction which was mostly performed in Cantonese, is there anything you have to change as a result?

For the Cantonese writing, we hired a writer who could communicate the story into Cantonese. Myself and the show writer, obviously wrote in English and then it was translated.

I also gave myself a brief to make the attraction as ‘visually’ readable as possible. Even though we would have our tour guide on the boat, I wanted the scenes to visually speak for themselves as much as possible. I don’t think we had to change much for the local audience.

Do you know why it has only been done once?

I’m not sure as to why that is. I think budget-wise it was prohibitive. Ghost Galaxy had a lot of media overlay and therefore could be altered fairly easily, our show was a lot more scenic. The sets were removed once the show was completed and it would have been expensive to put them all back. Storage is also always a problem at HKDL. One of the hardest aspects was removing the hippos and replacing them with the vine creatures for the attack scene.

Finally, and the most important, did you actually get to experience your own attraction?

Well, kind of. Not fully. I was in the process of moving myself and my family to Imagineering in Florida, so I was going to miss the full opening. I got to ride it in rehearsals and test lots of scenes, but I never got to fully appreciate opening night unfortunately.

Many thanks to Andy for taking the time out to shed some light into the S.E.A. inside Walt Disney Imagineering and what it takes to create the overlay. You can find more images over on his website.