Howdy Explorers, this week we are going to take a brief detour over our in-depth look at S.E.A. attractions and cover the first S.E.A. restaurant, Magellan’s. Nestled underneath Fortress Explorations this is the original meeting place of S.E.A. and boasts, possible, the first secret dining room!

Named after the great Ferdinand Magellan who the society recognised as the ‘greatest explorer of our time’. This fine dining restaurant is often considered the best in Tokyo DisneySea and on an extremely wet day we visited for lunch.

Just a warning, this is part review and part history. 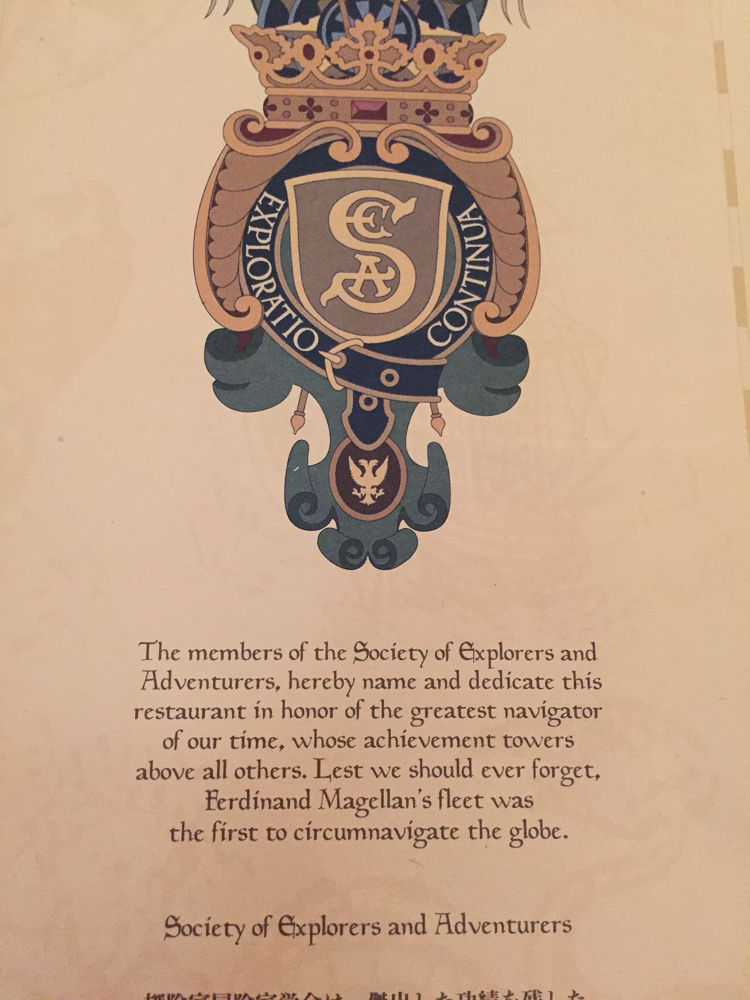 First, let’s cover reservations - These aren’t easy … advanced reservations are only open to Japanese residents via the web. There is a booking line, but this was also in Japanese.

The restaurant opens at 10am for on the day reservations but your mileage may vary depending on how good the cast members English/your Japanese is. 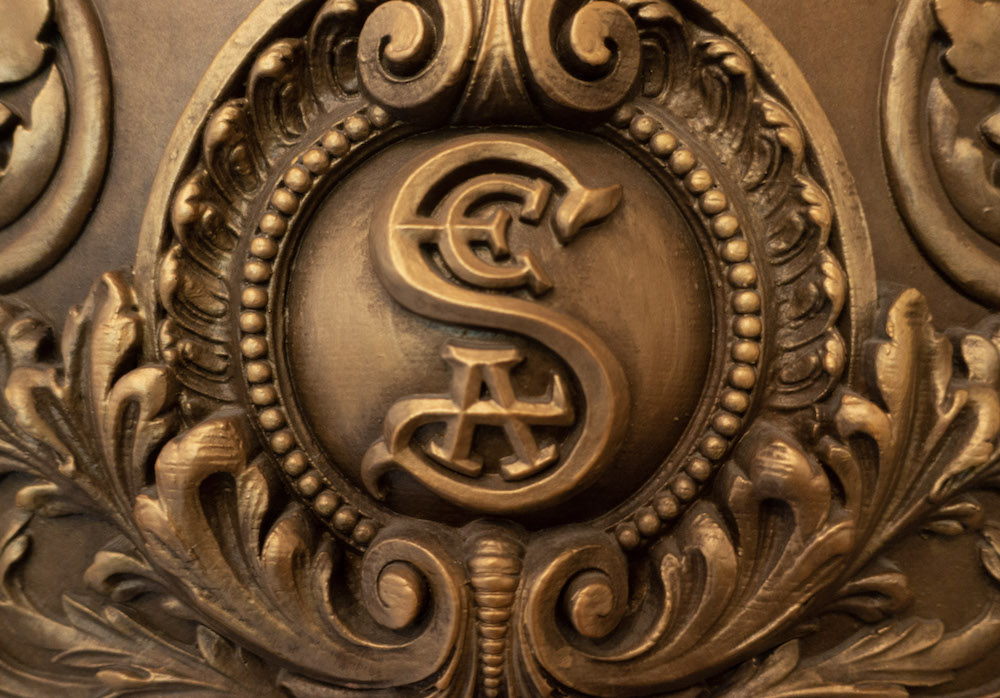 The S.E.A. logo on the entrance doors to Magellan’s

We have dined in a lot of Disney restaurants around the world and this is by far one of the most richly detailed I have ever seen. You initially enter through enormous doors emblazoned with the S.E.A. logo (see above) to a mezzanine level. The mezzanine wraps the restaurant’s centrepiece, a giant spinning globe set underneath a domed ceiling painted with the constellations. You can walk right around the mezzanine which also contains the bar Magellan’s Lounge (which doesn’t require a reservation). 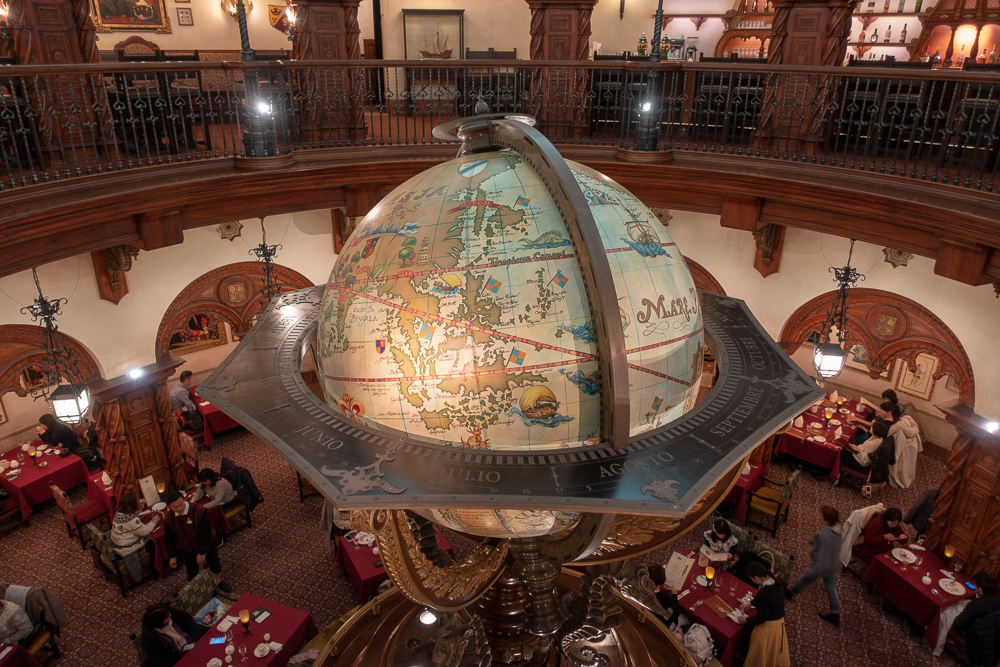 The globe as you enter Magellan’s, you can see Magellan’s Lounge in the top right 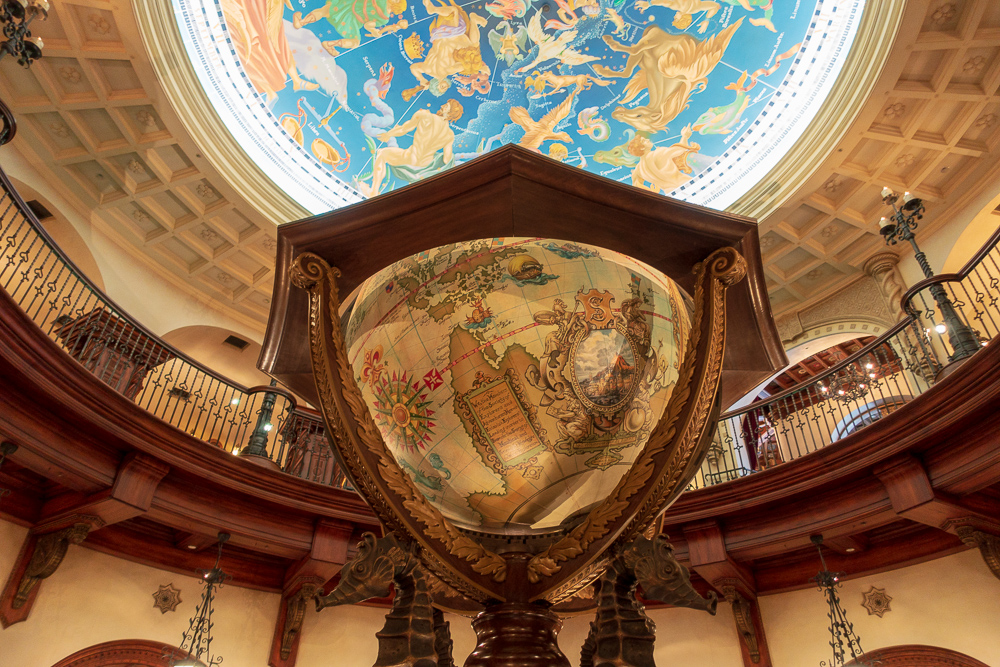 The ceiling of Magellan’s, designed by Wes Cook 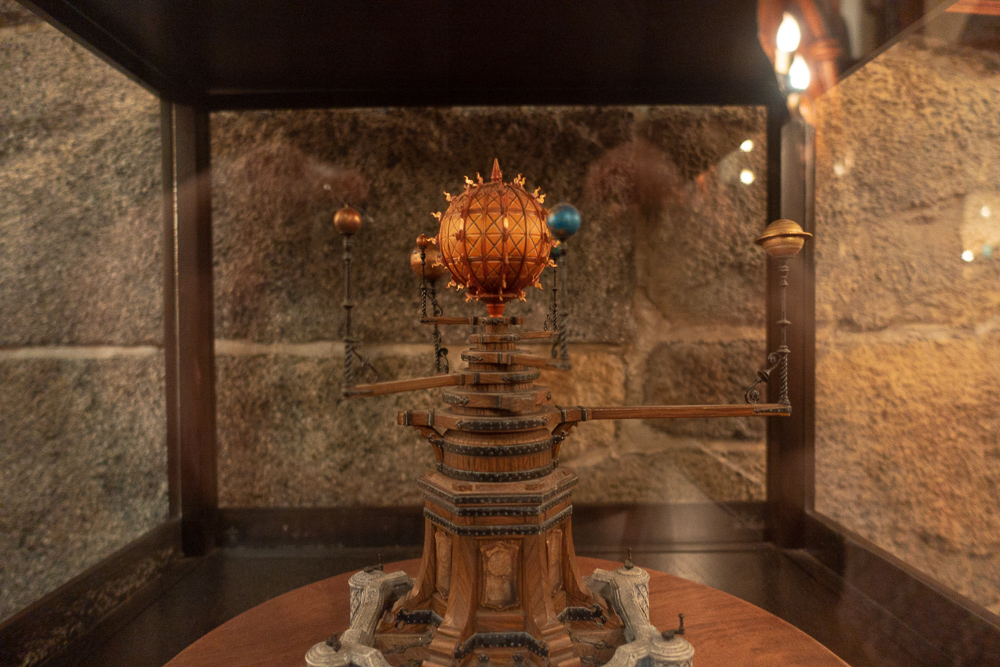 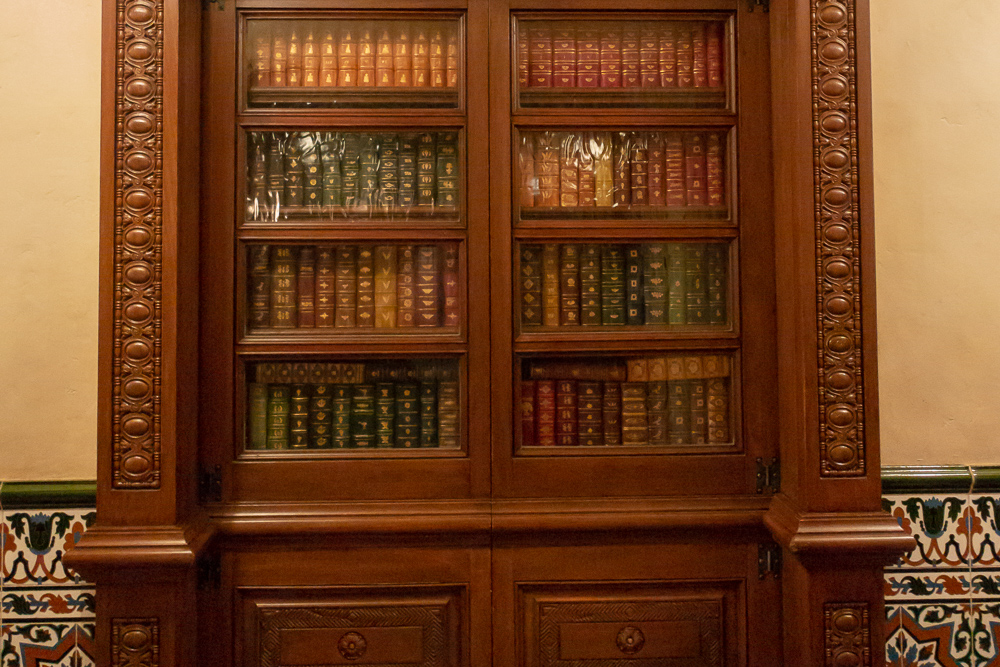 This first secret room which I know of in a Disney restaurant (correct me if I’m wrong) is in Magellan’s. Hidden behind an unsuspecting bookcase along the corridor to the restrooms - From the picture above can you tell where the button is?

Inside is themed as a wine cellar, each one of the casks is stamped with the Magellan logo. This doesn’t have much to do with S.E.A. unlike the secret dining room in the Skipper Canteen - but its cool anyway. Unfortunately it was full when we went, so we had to sit outside. However, the decoration and theming outside is a lot better. 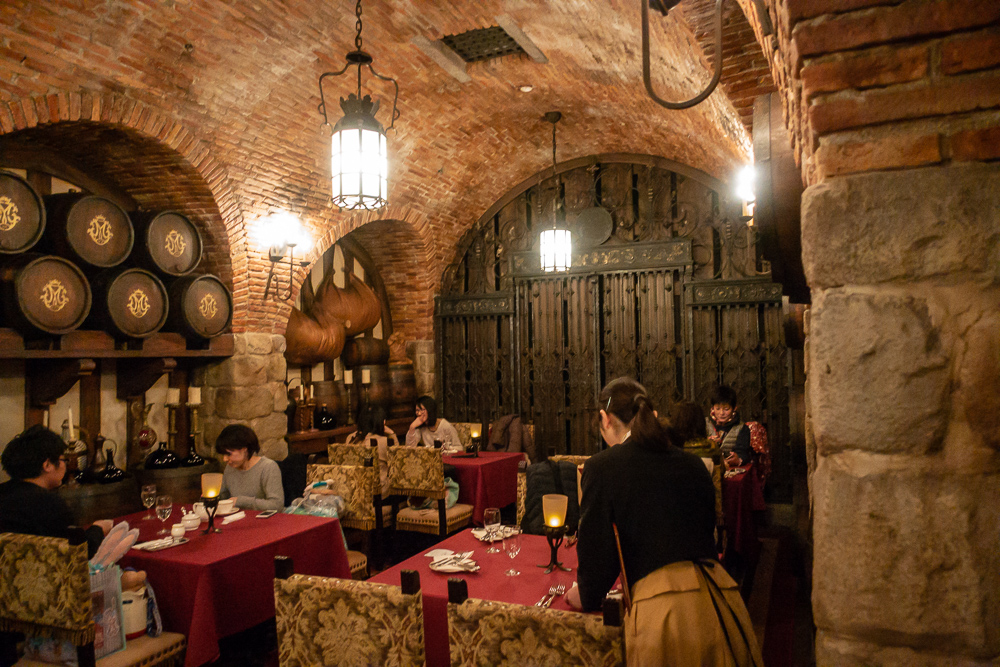 Magellan’s was designed by the very talented Wes Cook. As with some other parts of Fortress Explorations, a number of drawings from Cook were discovered by Twitter user Cabel. 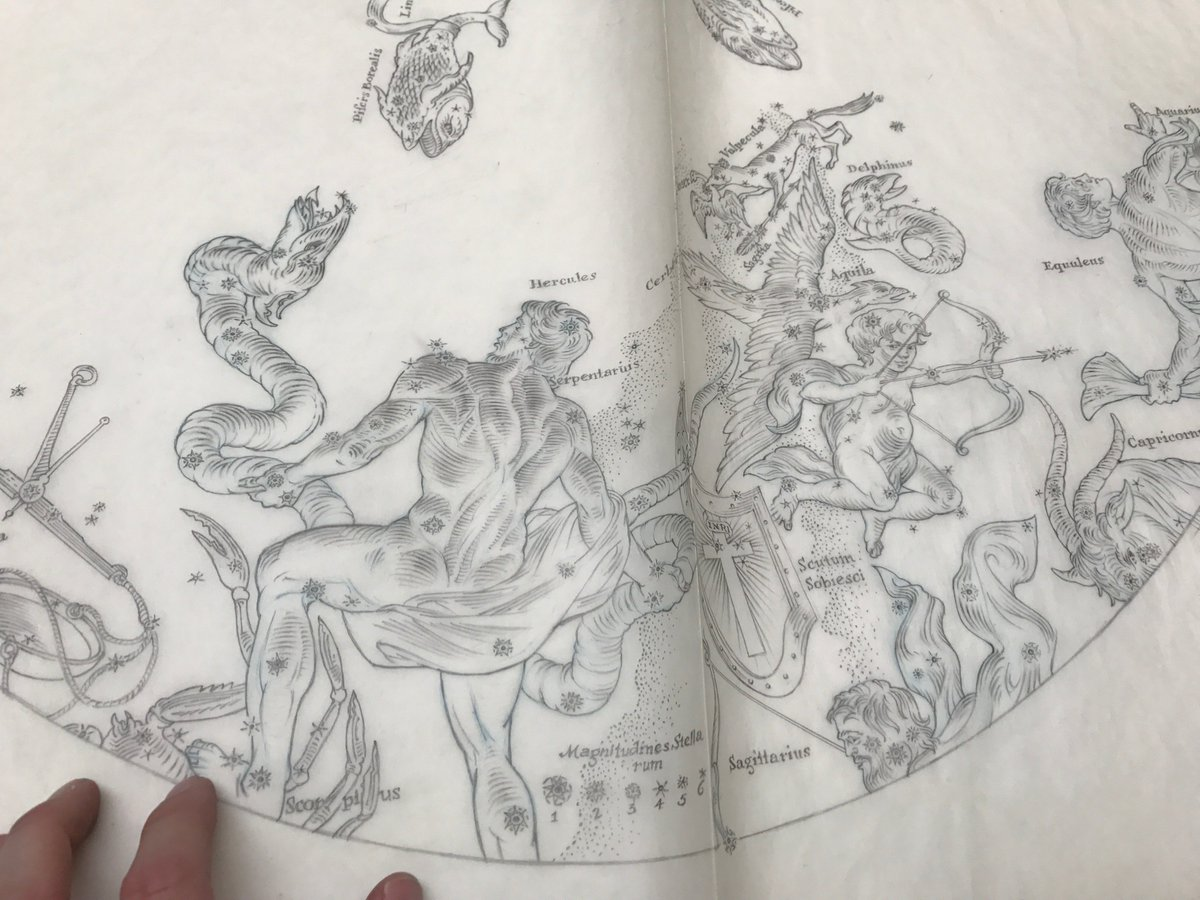 Source: Cabel on Twitter - Wes Cooks detailed illustration of the ceiling in Magellans.

Amazingly inside all those papers were in fact the instructions of how to paint the ceiling! These are an amazing insight to how the imagineers designs are brought to life. 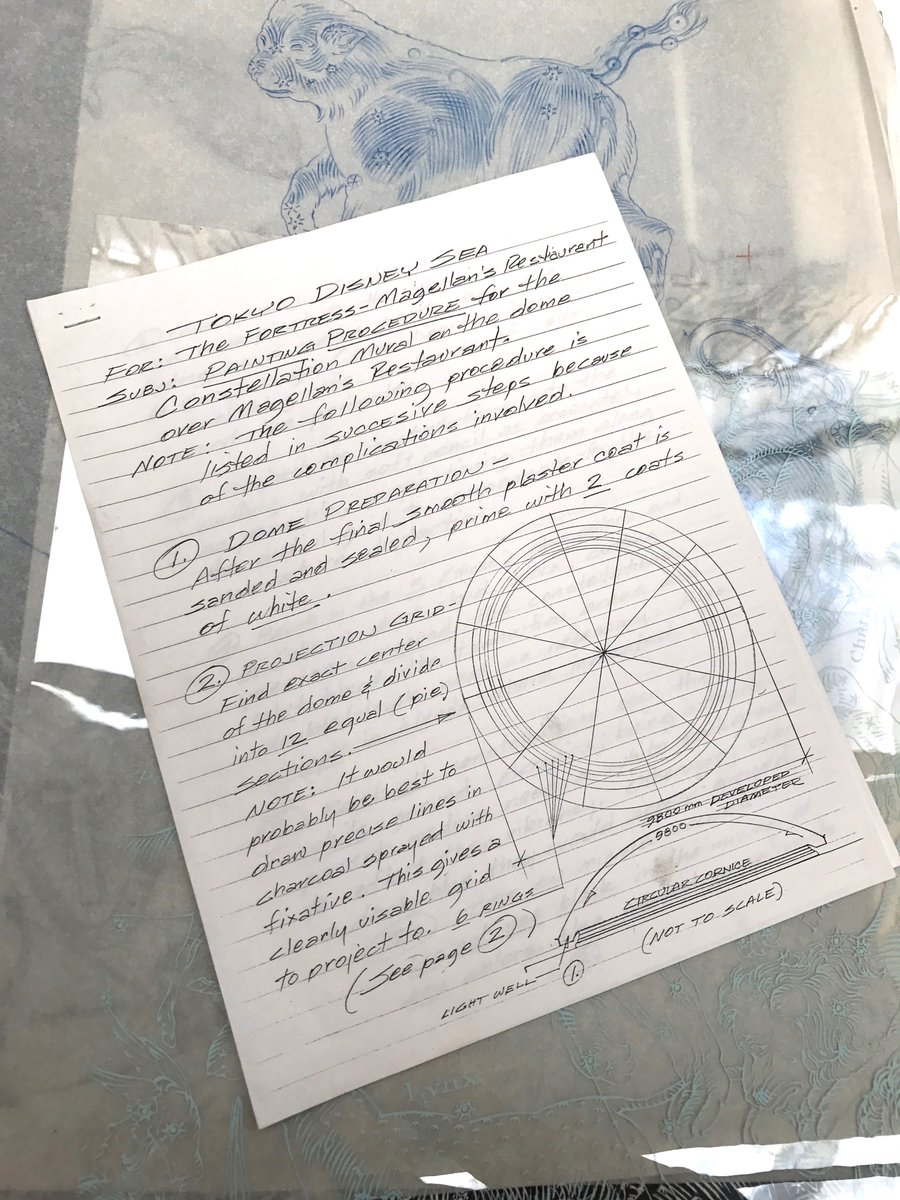 Source: Cabel on Twitter - Wes Cooks detailed instructions of the ceiling in Magellans.

Even though we love all the S.E.A. references, the majority of people would go to Magellan’s to eat. So I’ve also taken on the extremely hard task of eating the food 🤣

Magellan’s is classified as a fine dining experience and I would liken it to a signature meal at WDW. It mainly serves a series of set menus, each consisting of 3 courses and range in price from ¥3000 to ¥8000. The full menu can be found here (Japanese only - switch on Google translate)

At lunch Magellan’s also serves an A La Carte menu and a range of cheaper set menus. For around ¥3000 (£21/$26) you can get a 3 course meal, with bread and beverage - I thought this to be very cheap for a Disney theme park!

Jade started with the chicken broth soup which was lovely and very light. I had the shrimp and scollops, which were beautifully presented and tasted very fresh. While we were eating this the waitress also provided us with an assortments of bread. 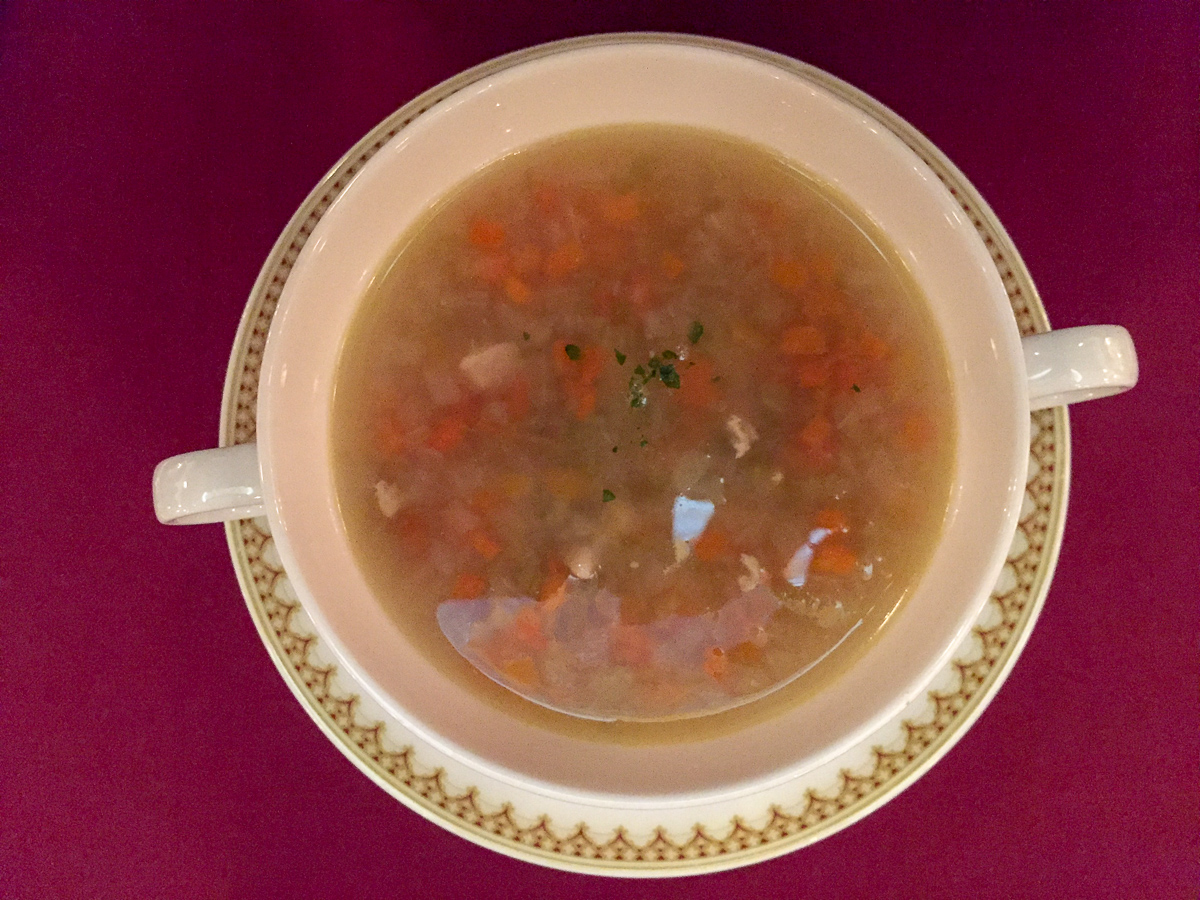 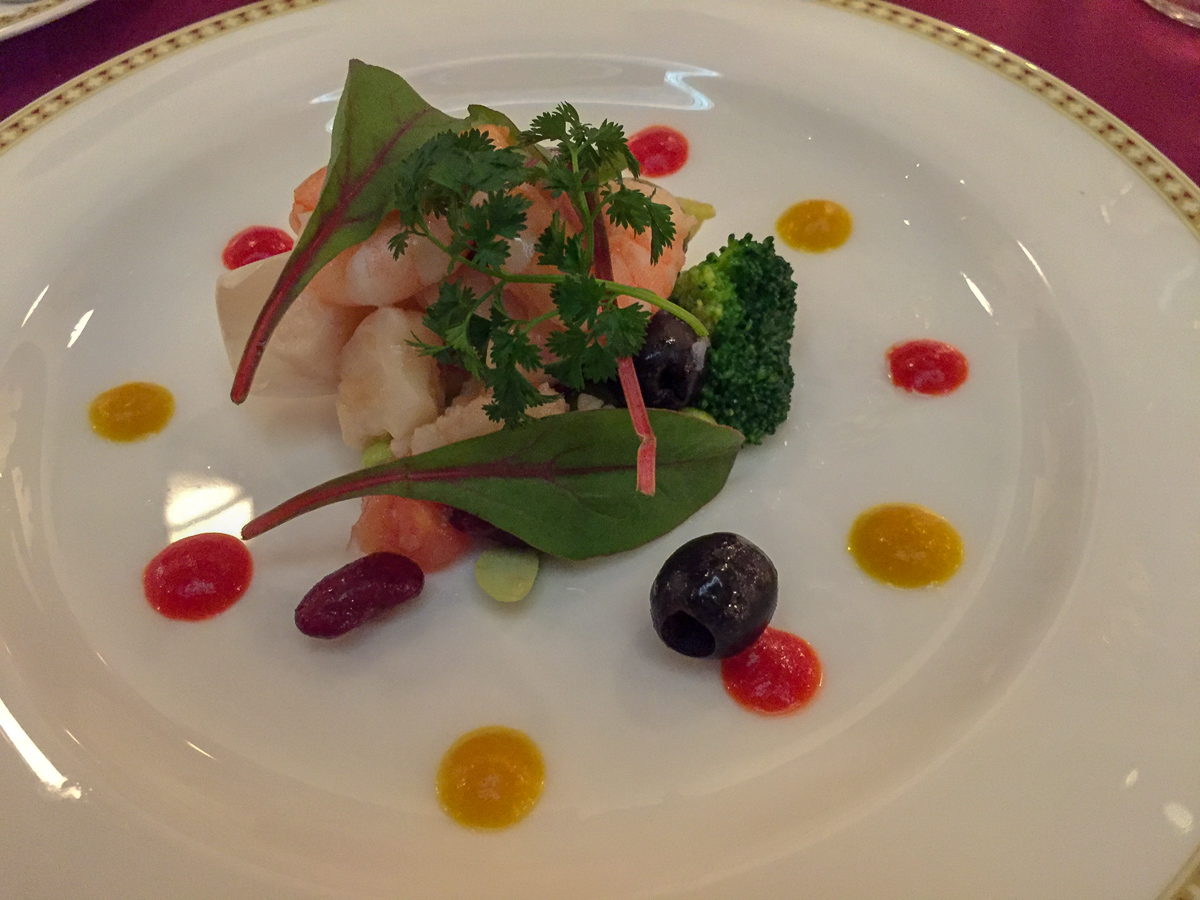 There isn’t a massive choice of mains to choose from but what is there is beautifully presented and tastes amazing. 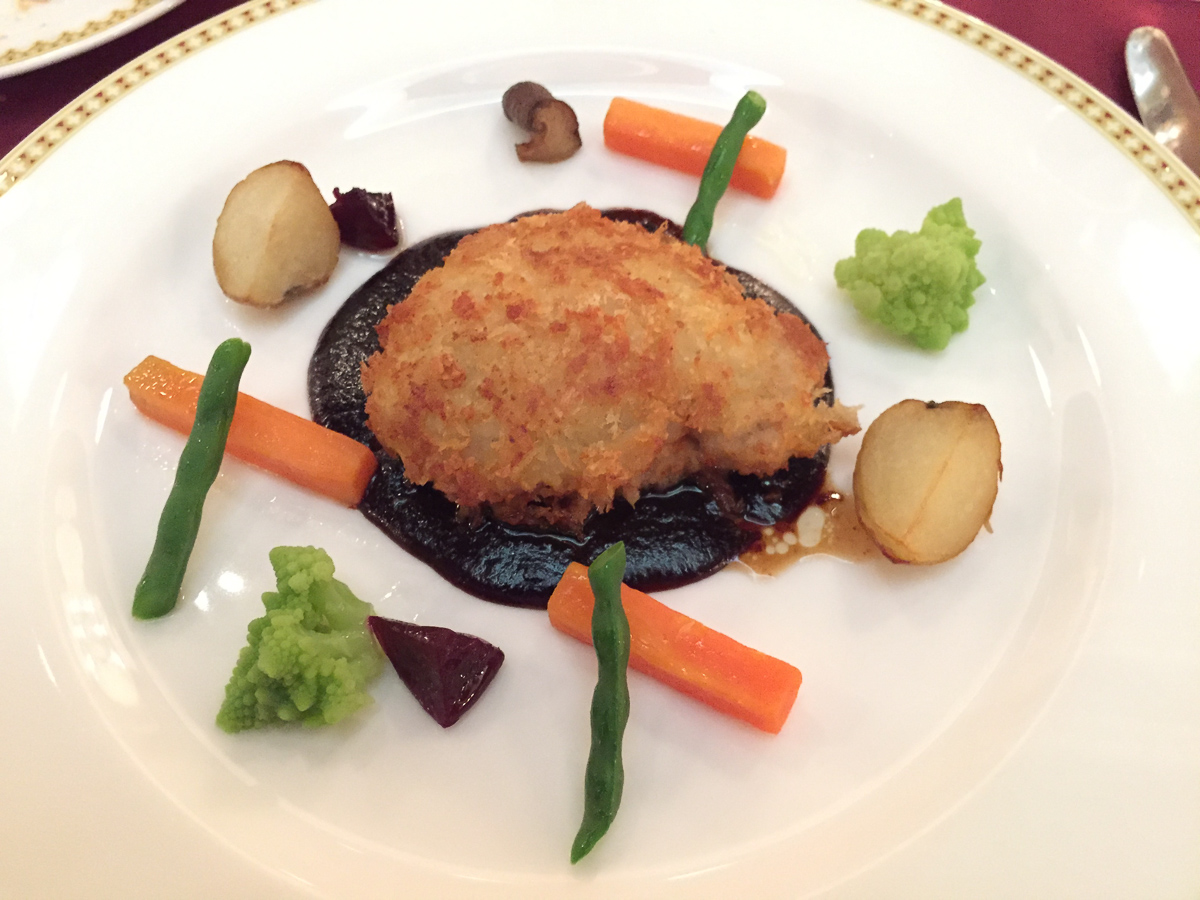 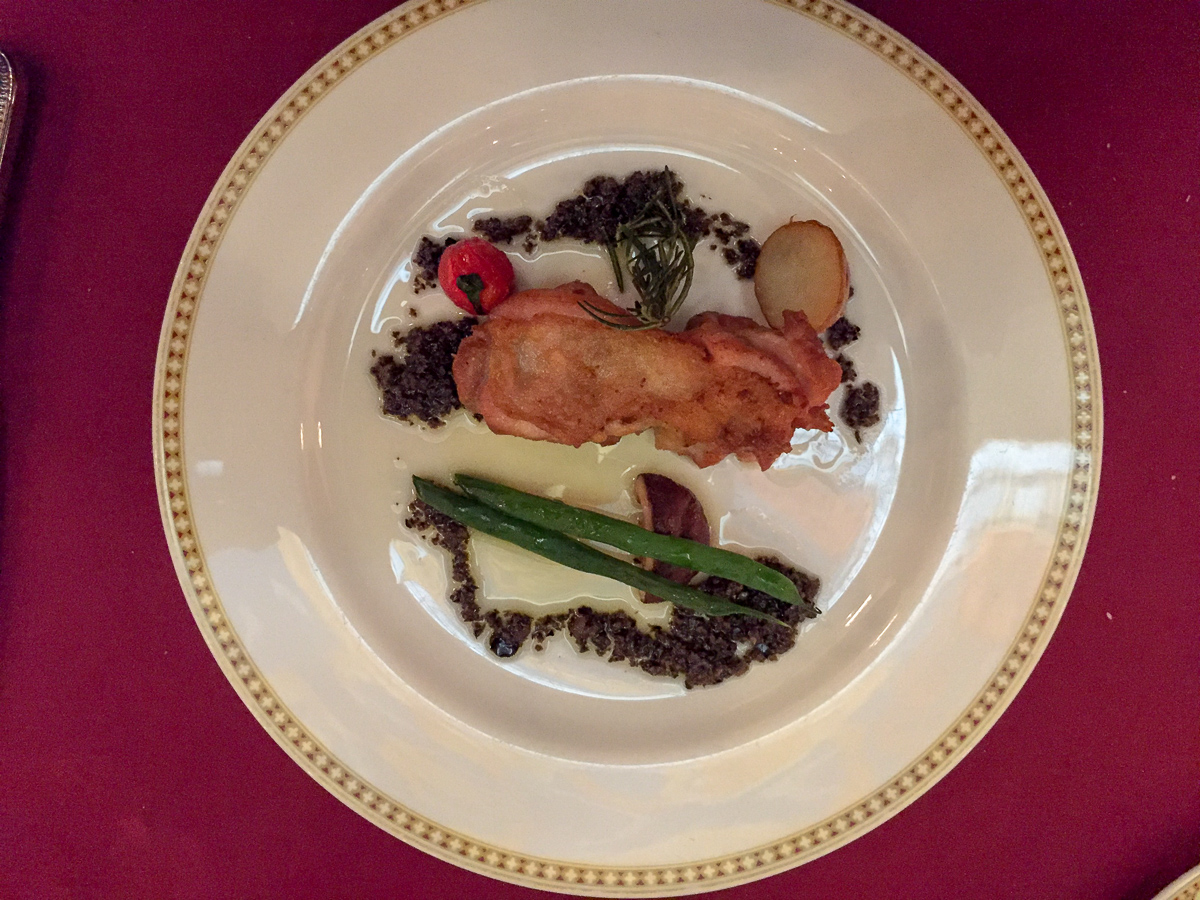 The chicken was lovely, though the tapnard sauce did leave a very oily residue on the plate.

This is the best bit of the whole meal! 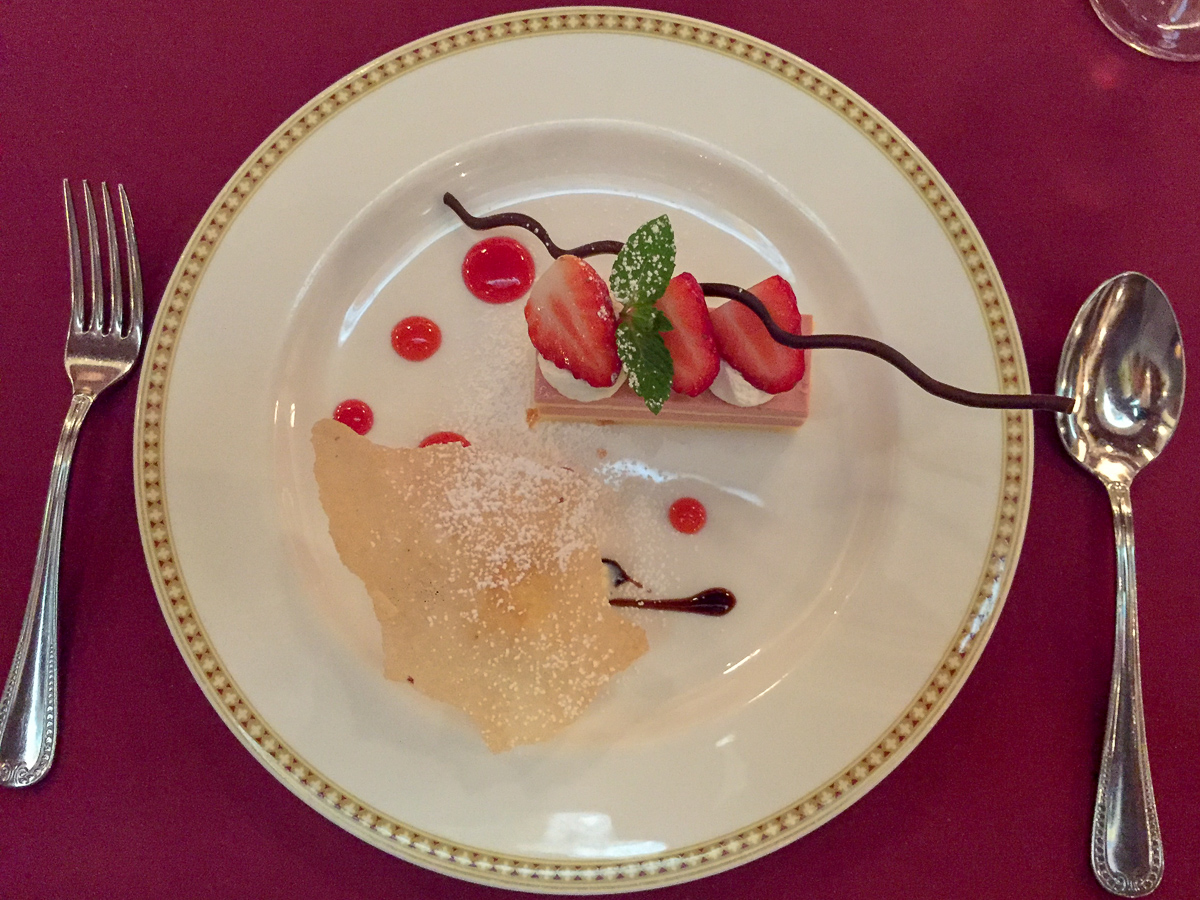 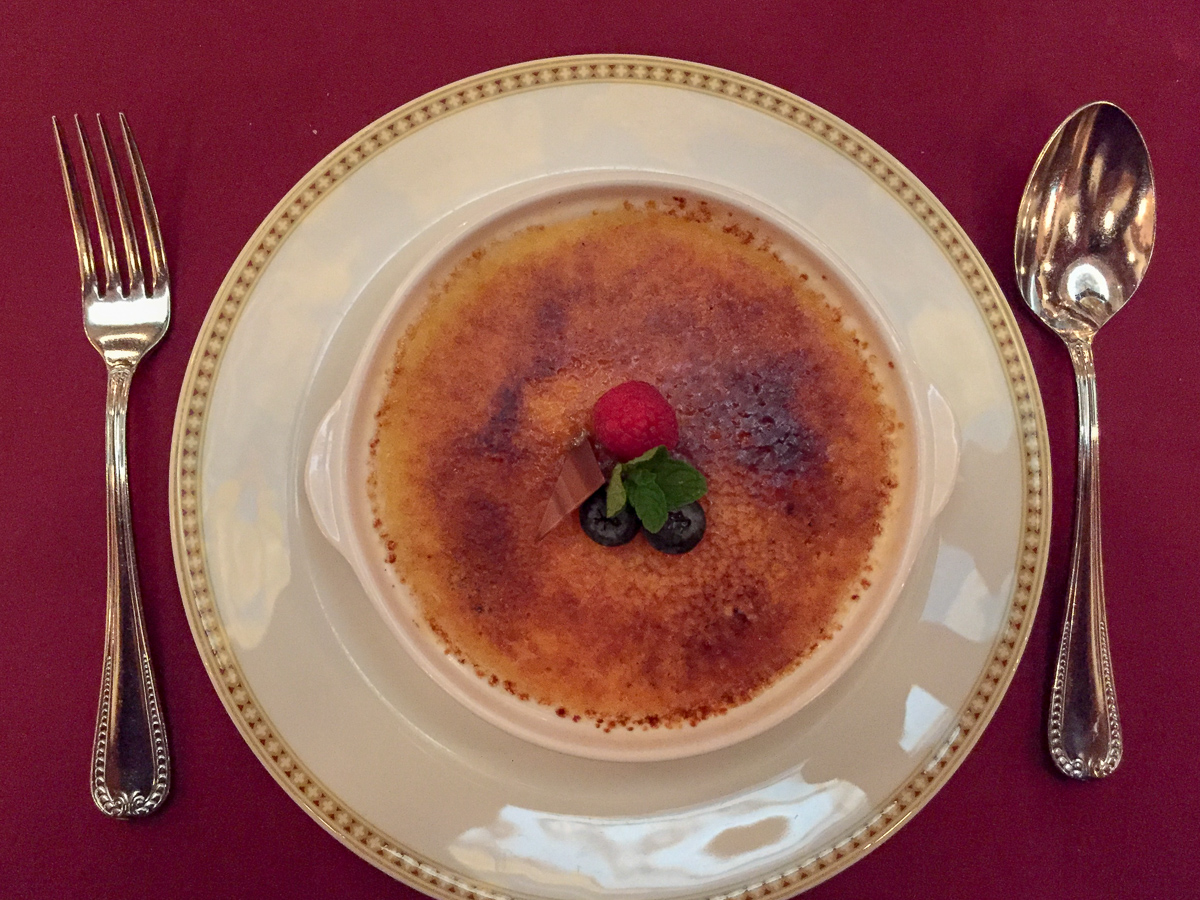 Throughout this whole meal our server was very attentive and tried her best to speak in English. The server was on hand and between courses even cleaned all the breadcrumbs off the table cloth. It was one of the best services we have received in any restaurant.

Magellan’s is one of the best themed restaurants I’ve been too. It’s just a shame that the theme doesn’t have much to do with S.E.A. It reflects more of the old world of S.E.A. before we get all the clever references between the different attractions.

You can see a more indepth article about Magellans.