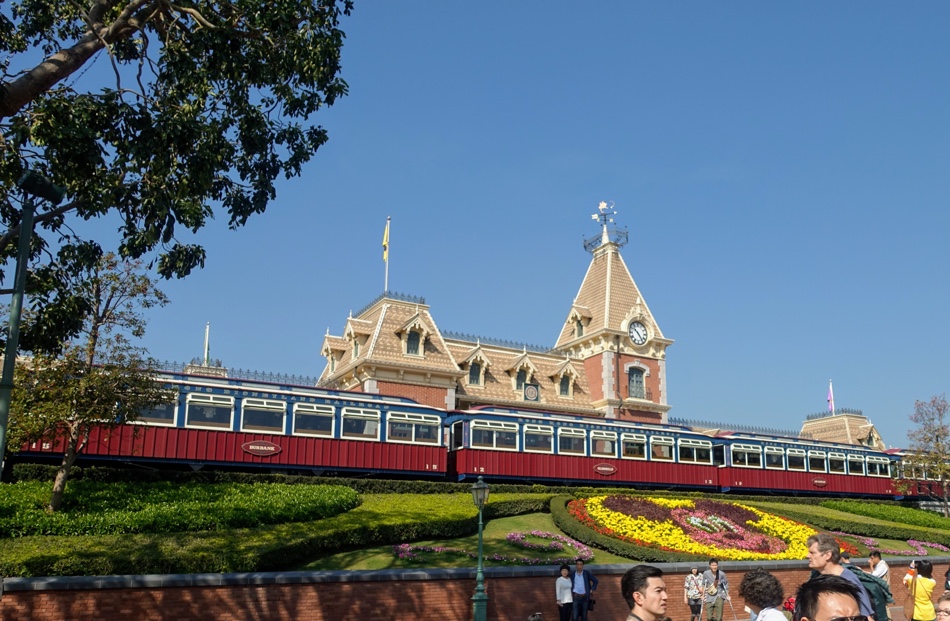 The park was opened in 2005 on reclaimed land in Penny’s Bay, Lantau Island. Construction starting in Jan 2003 the park had its opening ceremony on the 15th of September 2005 - one of the fastest ever constructed. It’s the smallest Disney theme park by a long way and has a daily capacity of 23,000 guests.

China actually deliberately slowed down the construction of Shanghai (originally forecasted for the early 2000’s) to help support Hong Kong’s development after the outbreak of SARS in 2005.

As I’m writing all this, it sounds pretty bad, why would anyone want to visit Hong Kong Disneyland? Well, it’s pretty awesome!

We visited on a clear sunny February weekday, a rare occurrence in a city which suffers greatly from smog. The park is located on the MTR (Mass Transit Railway) station on Hong Kong Island, it took us an hour and a half and probably cost us approximately £1. The MTR network is simple, easy to use and cheap. The park is well signposted so it really easy to find. Avoid travelling at peak times, the train gets hot and very crowded.

Take the MTR to Sunny Bay where you board a special Disneyland train. This train is the start of your adventure, you are suddenly transformed onto a train with soft seats, Mickey shaped windows and even Mickey hand handle bars to hold onto. 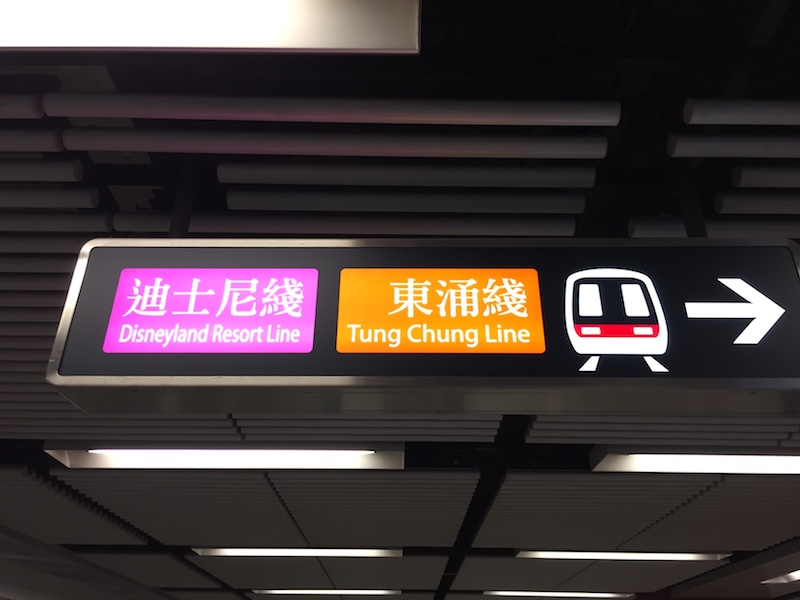 The train takes you straight to Disneyland and lets you off at the end of the park promenade. The promenade is a strange concept, a single long walk way passing a central fountain and take a right into Disneyland Park. It has been designed to serve two parks, the large left-hand expanse of Penny’s Bay has been left for a future expansion of the second gate.

Standard park entrance at the time of writing was about £60 per adult. Though if you book in advance online you can normally get a package with a free quick service meal in selected restaurants.

Upon entering the park at the beginning of Main Street is the Gazebo, unlike the US parks with feature the flag pole at the centre. They use the Gazebo to host Character meet and greets. However, none of these meets and greets had a set time and it was a bit random of who you could see. There was no such thing as Photopasses in HK (that we could see). The Character minders are more than happy to use your camera to take pictures, they didn’t have their own.

Main Street was a smaller version of the Main Street at the US parks, it featured the shops on either side of the street. Much like that of the US parks just on a much smaller scale. 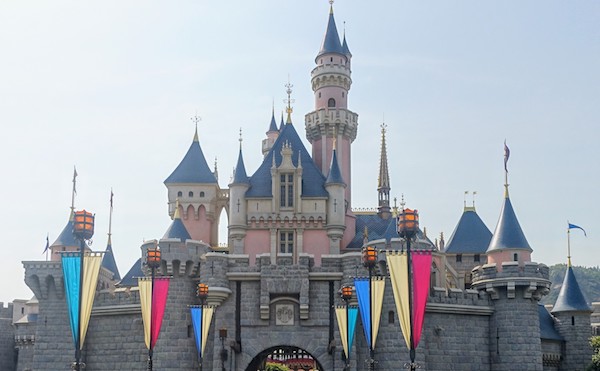 The castle, a clone of the original castle in Disneyland California is a beautiful design. However, compared to the other castles which have been built since 1955 it’s on the small size. The castle has actually modified its design from the original in order to accommodate the nighttime firework shows, something which had to be retrofitted in the California park. It appears the current castles days are numbered with the $1.4 billion investment that was announced in November includes a reimagining of the castle which looks to be more of the size we come to expect from the castles. The castle is surrounded by a moat and you can walk across the bridge and underneath into Fantasy Land.

“It was a beautiful park, but a little too small”
- Joe Lamzisero

They initially considered the addition of a large single land with a big E ticket ride, but with the Chinese culture being based on numbers they split this into 3 smaller lands. This brings the total to 8 which is a lucky number.

The teams’ first decision was to create Grizzly Gulch based on the American West, similar to Frontierland.

The central ride is Big Grizzly Mountain runaway mine cars. Towering above the land it bears a lot of similarities to Big Thunder Mountain, with the unique rock formations of Disneys California Adventure. Grizzly Mountain features a specific story line designed for the Chinese market, focusing on 3 bears and some lucky (number 8) and unlucky (number 4) mine shafts. 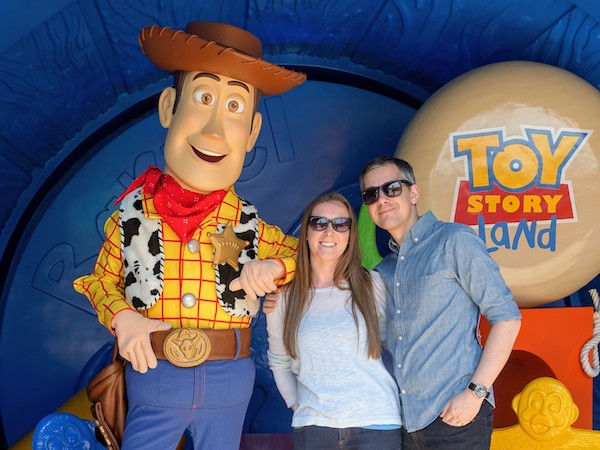 This broke from the exclusivity and the uniqueness that the Imagineers wanted with the rest of the expansion. Walt Disney Studios, in Disneyland Paris, had just opened Toy Story Playland and it was proving to be really popular with guests. It features RC Racer, Slinky Dog Spin and Toy solider parachute drop. Plus a meet and greet with Woody all designed to make it feel like you’ve shrunk to the size of a toy and are in Andy’s room.

This brings us to Mystic Point the third and final expansion. HKDL was lacking in dark rides and it was an easy win to drop in the Haunted Mansion. However the idea of a haunted house doesn’t exist in Chinese culture so it wouldn’t have worked, they need something new. 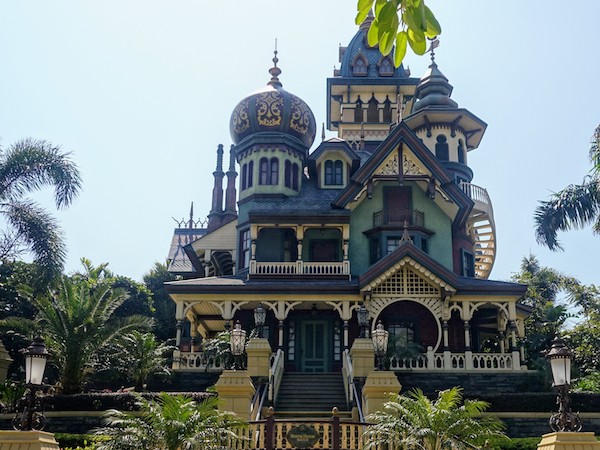 Mystic Manor was born, often rated as one of the best dark rides on the planet. I’ve written an entire article on its conception, history and my experience riding it. So I would recommend going to read that. For a summary though, it’s truly awesome and needs to be seen to be believed.

Tomorrowlands’ newest addition is the Iron Man experience opened in January 2017. It’s the first Marvel ride in a Disney Park since Disney bought Marvel. It’s a simulator based ride and uses the exactly the same technology as Star Tours. The story line is based on an alien attack in downtown Hong Kong which Iron Man and you have to save. I’m not a huge fan of simulator rides, they all the seem the same. This ride was done very well, the theming and story line were both excellent. 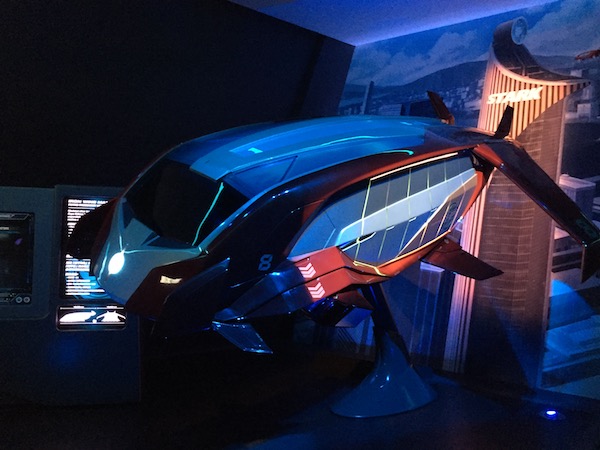 Not quite a dole whip 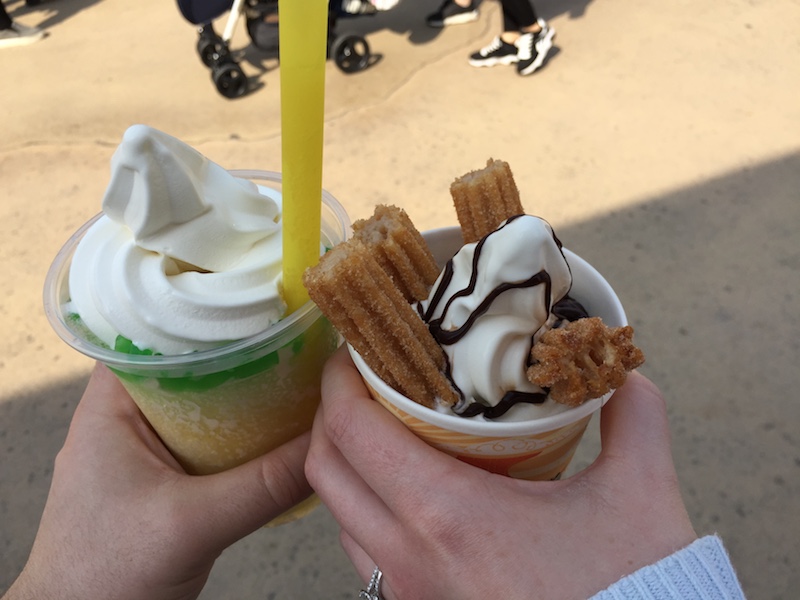 It’s not quite a Dole whip, but it tastes like Mango and it’s delicious. There was only one topping available to us and that was some kind of apple jellied sweet. We did have to search around for somewhere that sells it after hearing of it’s existence as Jessies Snack bar in Toy Story Land.

We ate the typical theme park burger in Tomorrowland next to the Iron Man experience where you could get a beef burger with a bun with Iron Mans face on it.

We only saw a single parade called Flights of Fantasy which was quite good and featured all the floats in the air. I took a brief (and terrible) video of one of the floats and the soundtrack which you can hear below:

Exciting things in the works

Despite Shanghai Disney being only 771 miles away (we were actually tempted to visit at the same time). Disney and the Hong Kong government is investing heavily for the future, with a second park planned and some amazing concept art on-show, it looks as exciting things are coming to Disneyland Hong Kong.

If you are a lover of dark rides and especially Haunted Mansion I would go for that alone, you won’t be disappointed! The park is amazing and lives up to the Disney brand even though it is only half owned by Disney. The park has some really exciting plans in the next few years so I would perhaps wait for those before visiting again.

Unfortunately, we had to leave before the fireworks so didn’t get to see the nighttime show.