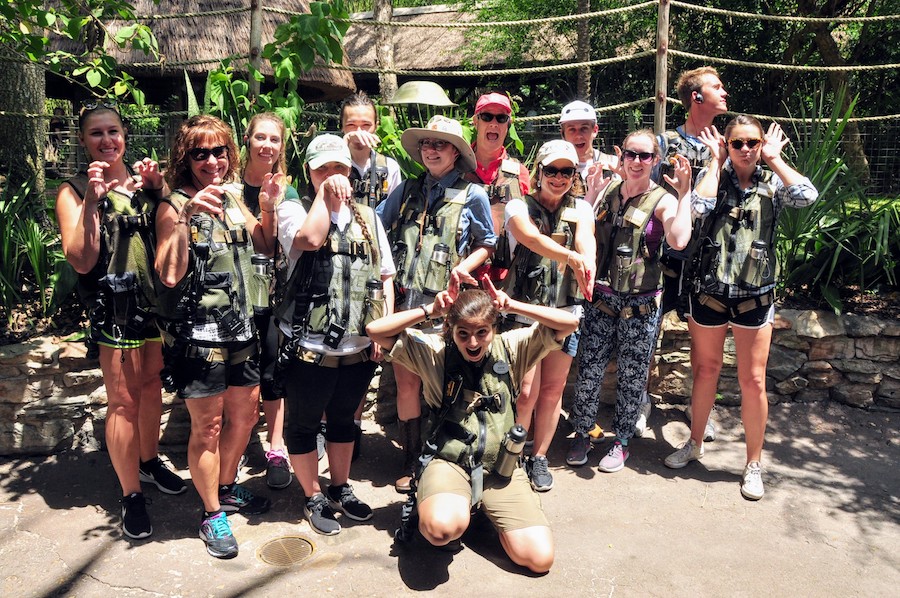 It was our first wedding anniversary in early May and we wanted to do something special. Originally we had an African safari planned, but once we realised how expensive I managed to convince Jade to go on a 10 day trip to Walt Disney World (WDW). I spent ages trying to find a surprise, something which would make our experience more special and stumbled across the Wild Africa Trek on the WDW tours page.

The Wild Africa Trek is a privately guided tour of Kilimanjaro Safaris in Animal Kingdom park. It’s one of the more expensive tours starting at $189 per person, but that does include breakfast or lunch. It has nicely produced video on the tours page, which doesn’t do a great job at explaining the tour.

I booked our tour about 6 months in advance, however, people were also booking the tour for the same day at the tours kiosk opposite Kilimanjaro Safaris. It cost us $378 for the two of us with our lunchtime tour, we went on a Monday but you may get a higher price at the weekend/peak times.

You meet your tour group to the right of Kilimanjaro Safaris, we arrived early on one of the hottest days on May. Jade wasn’t that happy with her surprise considering it was a 3-hour walk in the midday sun and she burns easily.

Once you are checked in you are weighed (to see which harness fits). Luckily the harness isn’t too uncomfortable, the website says wear trousers but there were lots of people on our tour with shorts and one lady with a short dress. You are given a locker for the valuables you don’t want to take with you, anything you do take with you needs to be strapped to you. They do provide straps for phones, cameras and glasses if you don’t have them. You will also receive a jacket to store all these items in and a water bottle (which is yours to keep), though be careful with the lid I managed to break mind not long after we set off - it landed in one of the fish tanks.

The tour comes with its own photographer which isn’t part of a Disney Photopass and is included in the price. They made a great effort to find moments of just the two of us and also managed to capture some amazing shots of the animals we saw. They give you a card at the end of the experience with a link and a code to download the photos.

When the entire group is ready to go, there were 6 couples in ours, you start off initially through the Pangani Exploration Trail. The guides, 2 initially but more joined, will talk you through and animals using a headset which everyone is wearing. It’s great to be able to hear them through the on-show areas of the park.

Eventually, you come to the off-show area, denoted by a small fence leading to a dirt path up a hill. It’s about a 5-minute walk over uneven ground. You are actually walking in between the natural fences designed by Imagineers for the enclosures. At the top of this first dirt trail, you come to the edge of the ridge which overlooks the hippo enclosure. Your lead through a small fence and your harness is clipped into a rail. This is the main selling point of the Wild Africa Trek you are now right next to the hippos, although a few meters up. There are no more fences, you are stopped going any further by the harness but it allows you to reach over the edge and really see the animals. You can see this in action in the press shot below. 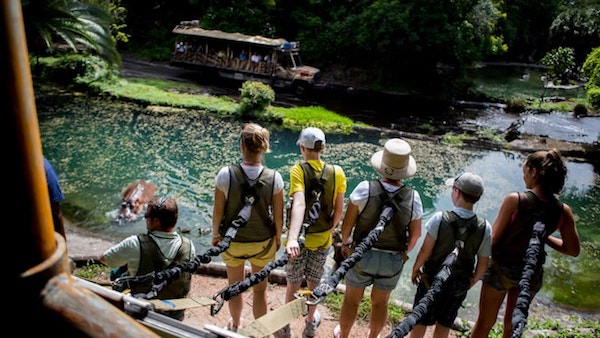 While we were there the hippos keeper gave a talk and gave us lettuce to throw. We got to ask the keeper any questions we might have about the hippos and we were feeding them for about 10 minutes, which drew them much closer to us.

In true Imagineer fashion, this isn’t just a walk. They have turned it into an adventure, crossing a rickety bridge over the crocodile enclosure. Even though you are strapped into a supporting wire above the bridge, each of the planks is just slightly further than the comfortable reaching distance. This intensifies the experience thinking you could slip and drop.

They have turned it into an adventure, crossing a rickety bridge over the crocodile enclosure 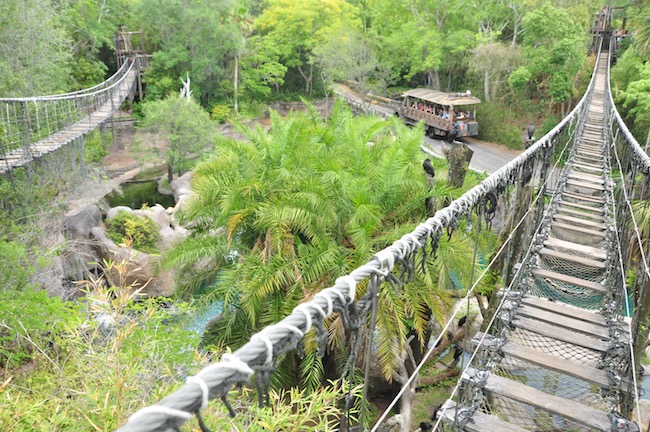 In total there are 2 bridges for you to cross and once at the other side, you are given a talk with the keeper of the crocodiles in the same way as the hippos.

Once we were finished at the crocodiles we headed on through the forest and eventually emerged at a platform next to the main Kilimanjaro Sarfaris ride track. This is where our Jeep was waiting for us to drive us into the savanna. Once you are in the savanna you drive off track which means we can get really close to the animals and the animals can get really close to us.

This experience is amazing, its a lot of driving and stopping in places next to the animals and taking an in-depth look at them. We also learnt which bits of the savanna were ‘Disney Real’. 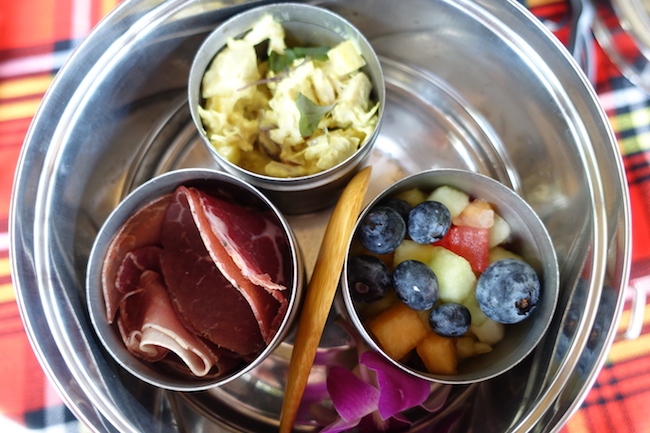 For lunch, we headed to the Boma in the middle of the savanna. This is a beautiful African styled log building. The dining area is completely undercover, to protect you from the elements. Once you arrive your tour team go to great lengths to make it feel special by laying out table cloths and setting the table. All the food was brought with you in the Jeep for the lunch and is prepared in a traditional African lunch box made of compartments. 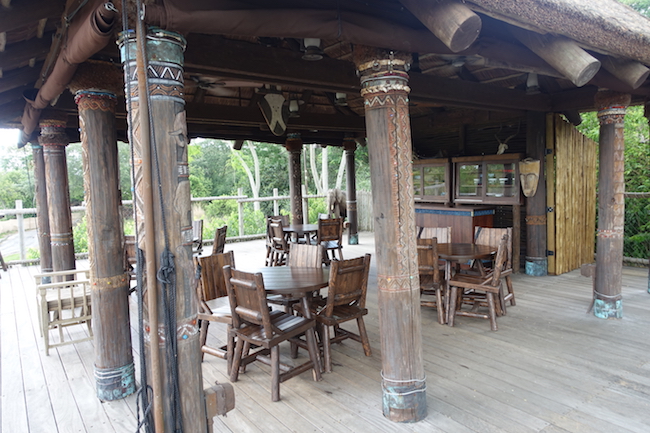 The boma has amazing views over the savanna and it was worth the money to just sit there in a quiet park of the park for an hour, eat a beautiful lunch and watch the animals. We were really lucky because the baby elephant was playing with its mother.

The rain broke just as we were heading back to the start. One of the brilliant parts of the tour, and unlike the tours in other parks your fee in part goes to the Disney Conservation fund which helps protect these animals in the wild.

I thought it was a brilliant tour which covers lots of different areas and I would recommend anyone to give it a try. 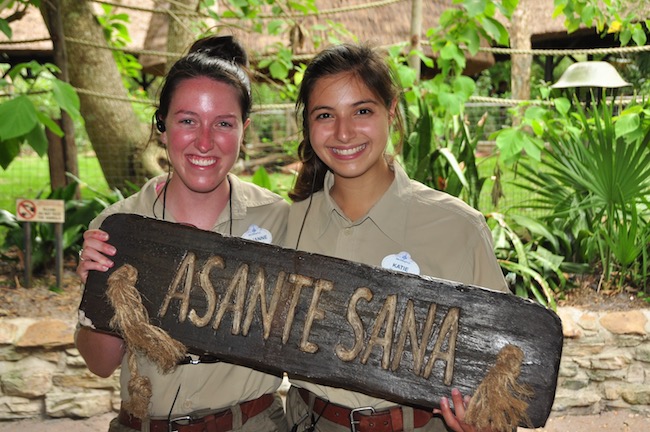