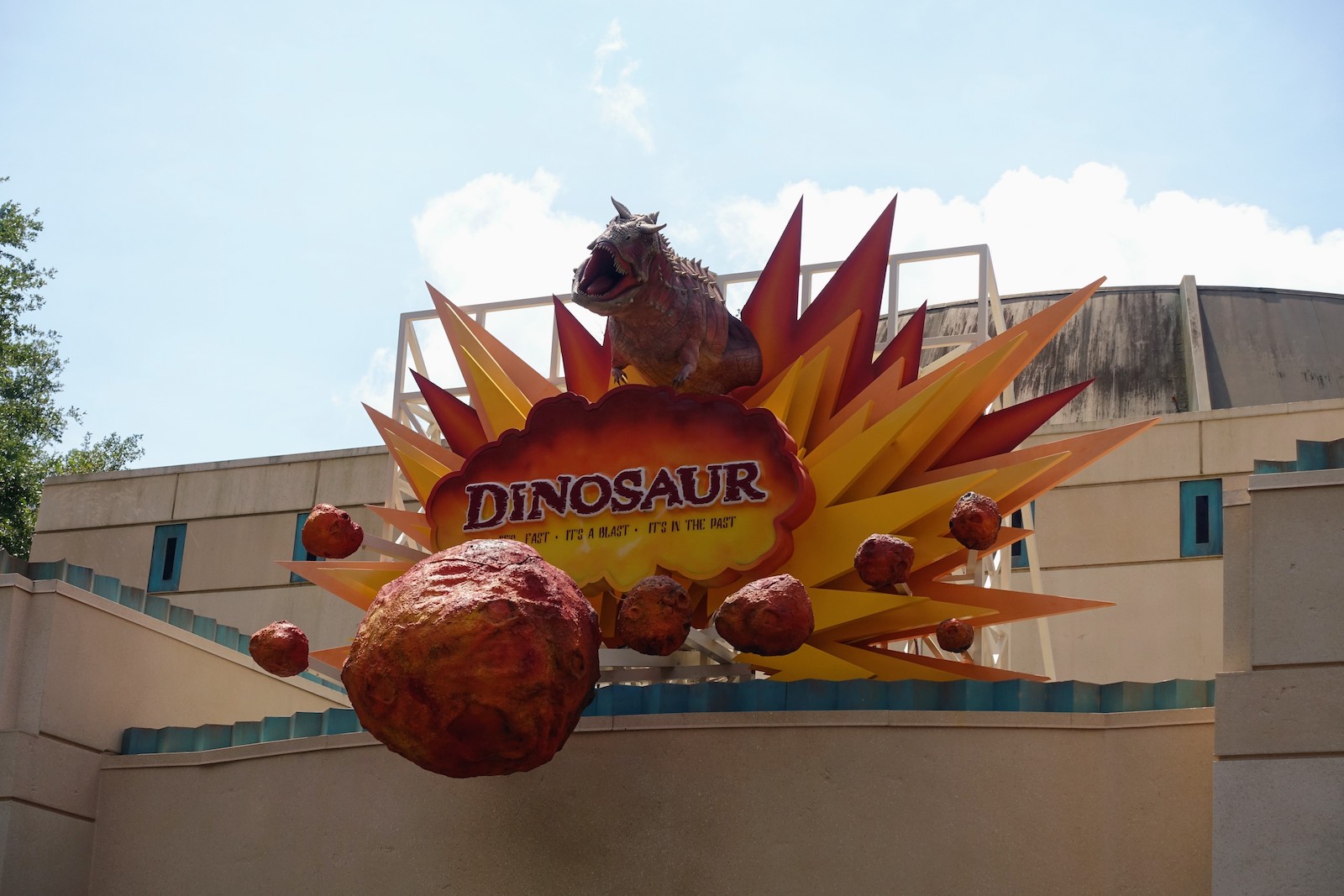 What happened to Dinosaur?

With all the recent talk of Dinoland at Disney’s Animal Kingdom being replaced by the Indiana Jones franchise. Let’s go back and look what happened to Dinosaur, the Indiana Jones clone. How it came about and how it doesn’t quite live up to the original.

I’ve scoured the internet to try and find the history behind Dinosaur the ride, if you have anymore information or believe anything to be incorrect please let me know in the comments.

It was the early 1990’s and after a successful launch of Disney’s Hollywood Studios in 1989, Disneys then CEO Michael Eisner was hoping to expand the Disney park empire. Hollywood Studios was built to counteract the growing threat from the Universal Studios theme park and there was another looming threat on the horizon, Busch Gardens, a wildlife based theme park was growing in popularity.

This is what sparked Disney Imagineers dreamed up the concept of Disney’s Wild Kingdom, a park split into 5 different lands, Asia, Africa, Dinoland, Discovery Island and the Beastly Kindom. Disney didn’t have an unlimited budget and costs began to spiral quickly. A decision had to be made to delay one of the lands, either Beastly Kingdom or Dinoland. At the same time, Disney was producing a new motion picture called Dinosaur, the decision was clear, keep Dinoland and hope that it will cross promote the theme park/movie and delay the Beastly Kingdom for a future expansion.

Dinoland still needed an E-ticket ride and in the environment of a theme park already over budget, it had to be cheap.

There were two original E-ticket attractions for Dinoland in Animal Kingdom one was called Excavator, a traditional roller coaster. The second was a family-friendly ride which took you back in time so you could meet the dinosaurs. However, developing new rides and ride systems are expensive, Imagineers were encouraged to find a different solution. 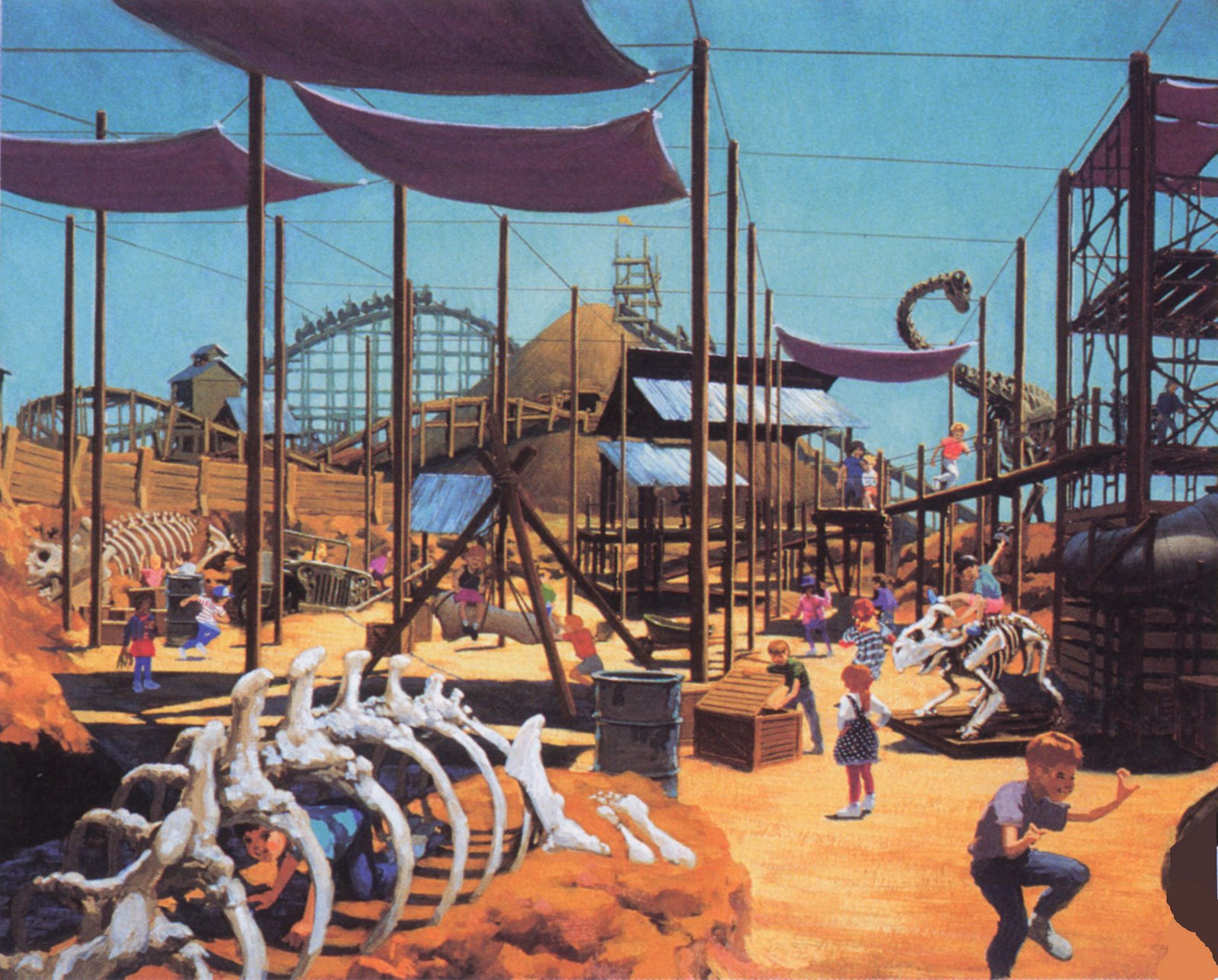 You can see Excavator in this drawing by James Wong of the Boneyard and below another rendering of what encounters with the dinosaurs looked like on Excavator. Both images are from Disney and More’s excellent article on original Animal Kingdom artwork.

Disney had just developed a new type of ride platform called the EMV, this platform was able to tilt regardless the speed or direction of the vehicle. It was first used in Disneyland’s 1995 Indiana Jones Adventure: Temple of the Forbidden Eye (IJA), the ride was a huge success, thanks in part to the ride vehicle and spectacular theming used. 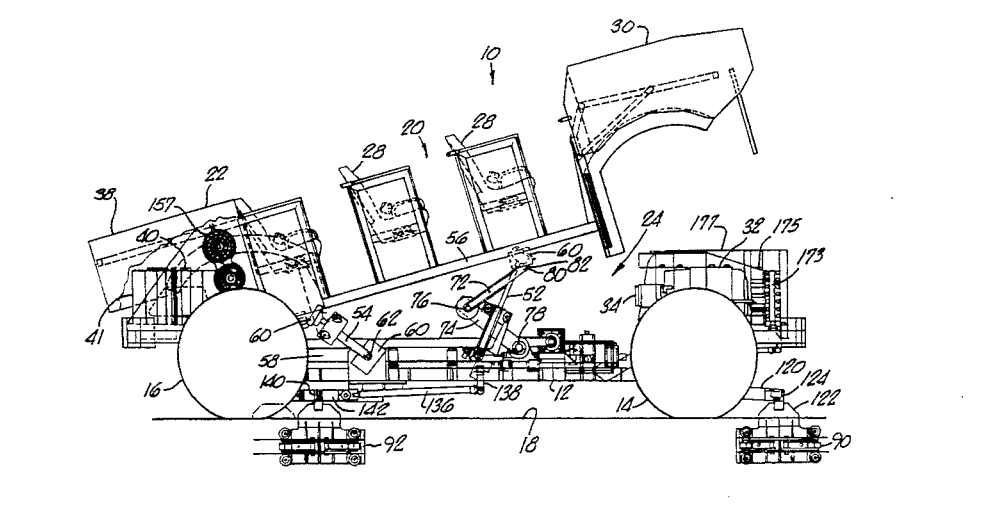 The Imagineers took the same ride type and came up with Countdown to Extinction (now known as Dinosaur). It was a clone of IJA, reusing the same track layout and ride vehicles except with a different theme layered on top. A known ride with all the bugs and quirks already solved is a lot cheaper to produce rather than building a new untested ride. The ride used both elements of the two previously planned Dinoland attractions, a storyline which involved time travelling guests combined with a thrill ride.

I always find myself, if I’m on the Dinosaur ride, kind of saying, ‘Oh here’s where the snake would be or here’s where the ball would come out.’ Each of those turns were designed for those specific gags and setups, so it was a tribute to those who worked on Dinosaur to try and work with the given and create new things that reacted in the same way. Tony Baxter

Copying a ride between theme parks can lead to problems, as Tony Baxter mentioned above, the ride was designed around the IJA track layout. The Imagineers had to work with what they had, a track layout designed for a different ride.

The bigger problem with Dinosaur was not the replication of the track design but the additional budget cuts halfway through construction. Michael Eisner was slashing budgets across all the theme parks. At the same time that Animal Kingdom was being constructed Euro Disney also had to be paid for. 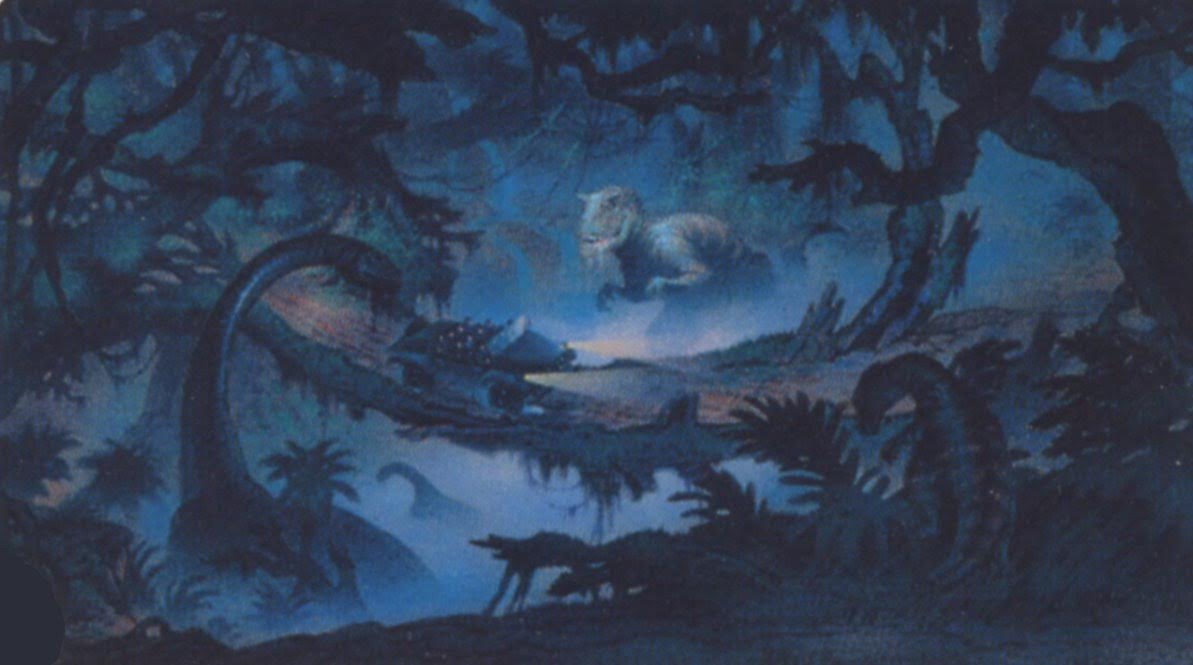 You can see in the original concept for Dinosaur above they actually planned to copy the bridge scene from IJA. There is a fantastic story by Alain Littaye regarding this image.

In 1997 or so I was at WDI for a series of interviews and in the office of an Imagineer friend I saw this painting. I asked him if it was in relation to Animal Kingdom - not open yet at that time. He answered me that it was indeed for the “Countdown to extinction” attraction and that “we would be lucky if it looks like that at the end…”. He was unfortunately right, and this leads me to the biggest problem with “Countdown to extinction” - now “Dinosaur”: the cuts in the budget.

If you take the first scene and compare it with the last there is a stark contrast in detail, the first is rich and colourful the last is basically a dark room. You can clearly see the cuts in funding while the ride was being constructed.

When the movie Dinosaur came out in 2000, Disney changed the name of Countdown to Extinction to Dinosaur. This promoted a number of changes to make the ride more family friendly. Some of the jerkier movements were scaled back making the ride less intense, the scarier scenes were modified and toned down. They brought the minimum ride height down to 40 inches to encourage more people onto the ride.

In the end, I love the ride, I think it’s fantastic but I’m disappointed we never got to see it as the Imagineers did. Money got involved and severely limited the scope of the ride. When ever I think of Dinosaur/Countdown to Extinction I always think about this quote from Marty Sklar when talking about John Hench in his book One Little Spark:

Hench knew there were budgetary and scheduling issues. But during his sixty for year career at Disney, he learned that the key reason attractions like Disneyland’s Enchanted Tiki Room and the Adventureland Jungle Cruise are still entertaining guests more than half a century after their debuts are that no one settled for “good enough”.

In the end, Michael Eisner did settle for “good enough” and for that reason, I believed the Imagineers had always felt disappointed when riding Dinosaur and that’s why it’s fate may be doomed.