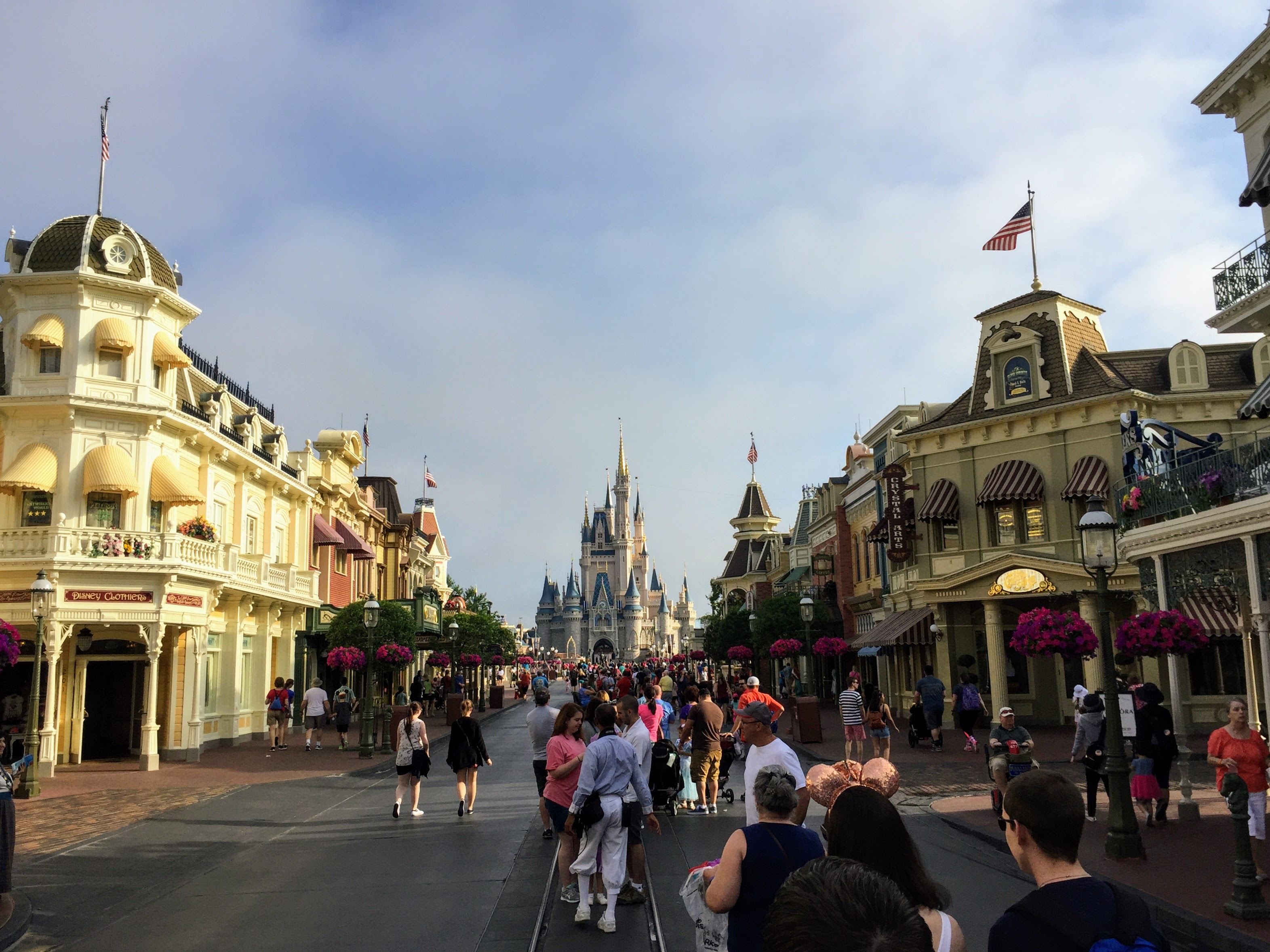 Marceline to the Magic Kingdom Review

On a very wet Friday morning, I woke up early and made my way from our room in Coronado Springs to the Magic Kingdom. I had to be there for park opening at 08:00am in order to meet the tour guide. It was a surreal experience, boarding an empty monorail train and riding towards a park normally alive with activity just getting warmed up.

This particular tour is only run just after park opening, but before the rope drop ceremony and the park officially opens. At this time in the morning, depending on where you are, transportation may be an issue. The resort buses do run from about 6:30am, however, they are few and far between. I actually ended up driving to the Ticket & Transport Centre then caught the monorail to the Magic Kingdom.

I was one of the first people in the park that morning and made my way to the Town Hall, just to the right once you’re into the park. Registration was quick and you are giving a bottle of water and a headset. Once all the guests had arrived we put on our headphones and headed off to start the tour.

Marceline to the Magic Kingdom is a 3 hour morning tour where you get to see a glimpse behind the scenes. You are taken on a tour of Walt’s upbringing in Marceline, Missouri. The tour costs $49, though I had a voucher which made it slightly cheaper. Unfortunately, photographs are prohibited on some of the more interesting parts of the tour so apologise for the lack of photography. I’ll try and avoid covering the whole tour and instead try to give an overview of what you can expect.

The tour starts off at the beginning of Main Street and we start with a brief history of Walt and the inspirations behind Main Street, his hometown of Marceline, Missouri. Our tour guide took us through some anecdotes from Walt’s early years and pointed out some of the easter eggs along Main Street.

From Main Street we move through to Liberty Square, this was closed to park guests when it was entered and it was lovely to see it completely empty apart from a single cast member who was sweeping away the water from the rain in the night. The guide touched on the history of liberty square and the hall of presidents but the main focus of the tour was the Haunted Mansion.

I’m a big Haunted Mansion fan and this tour is fantastic if you have any interest in the Haunted Mansion or any of the classic rides. The tour guide goes into great detail about Haunted Mansion. You first start off in the queue and are told all about the easter eggs and the recent renovation to the queue lines. You are then ushered into the ride where your tour guide talks you through the attraction while you ride. Next is the best bit, taking behind the scenes to see how it works. 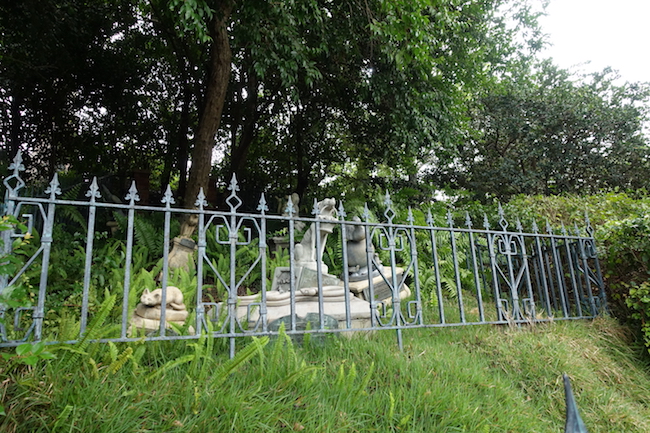 Just by the restrooms, to the right side of the Haunted Mansion is a door, an off-stage entrance which takes you into the show building for the Haunted Mansion. You get to see the true scale of the ride and not just the frontage. On the edge of this enormous warehouse is a small door which we are taken through. This leads you to a small repair shop which contains the Haunted Mansion diagrams and schematics. I think it’s important to mention that this is not ‘Disney real’, this is a real workshop with the real cast members who maintain the ride.

From there you are lead along a fluorescent line into the ride area. This takes you underneath the ride take and you eventually stop at the edge which clear instructions not to pass the line so that guests riding can’t see you. What you’re looking at is the dining rooms scene of the ride. The guide will actually explain how the effect of the disappearing dancing ghost works. They will hopefully give you some clues on some of the originals of the mannequins in the ride.

Even though the effect is very simple, I can only imagine how this appeared to guests 60 years ago. Whereas now we can achieve a similar effect with digital projectors I think it’s amazing to think this is all just motors, pulleys and lights. 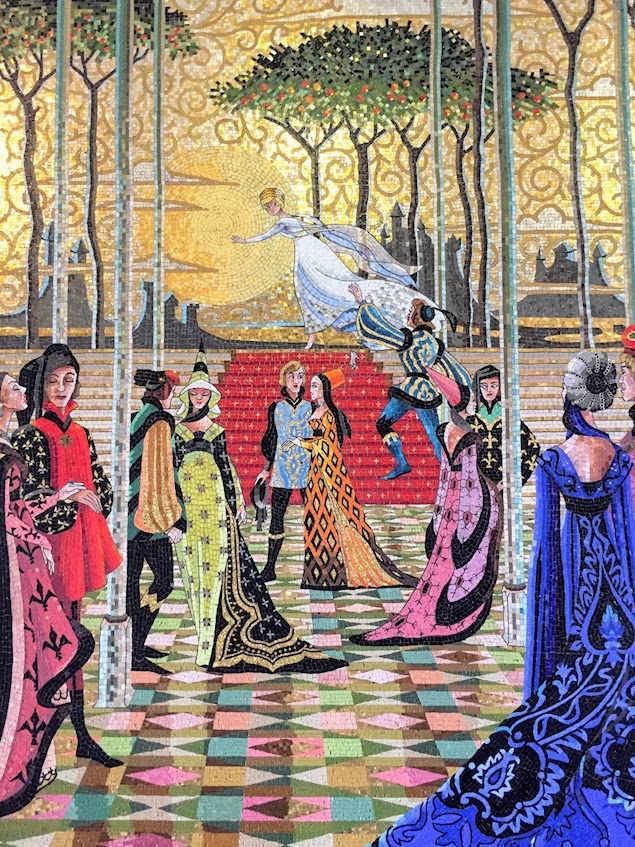 We made our way to Cinderella Castle and stopped just below to look at the mosaic murals. Thousands of people pass this spot every day without taking the time to look.

There are 5 murals in total which tell an abridged version of Cinderella. They were designed by Dorthea Redmond and made by artisan Hanns-Joachim Scharff. In total, they took over 2 years to complete. 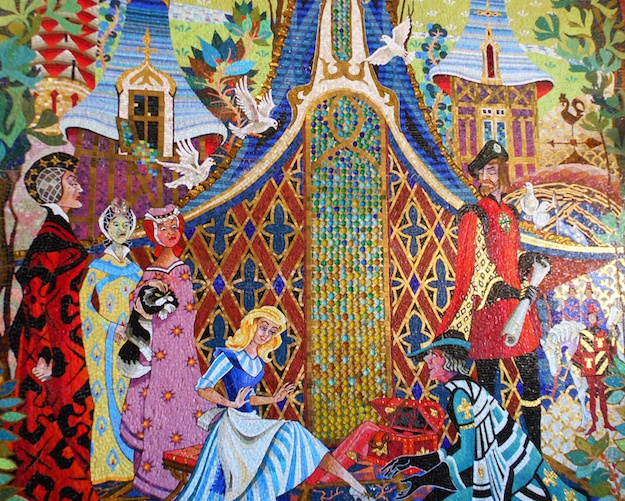 If you look at the 4th Mural, above, where Cinderella tries on her glass slipper you can see the footman’s face is that of Herb Ryman. You can read more on the Murals at Cinderella Castle over at allears.net.

We were meant to end our tour on Walt Disneys’ Carousel of Progress, one of only two rides in the park which bares, can you name the other? However, it was down for maintenance. Instead, the tour gave us a brief overview of the ride from the outside.

It’s a fantastic tour for those who are interested in Walt Disney. If you are not fussed by the Haunted Mansion perhaps it wouldn’t be for you since nearly an hour of the tour is spent on that single ride.